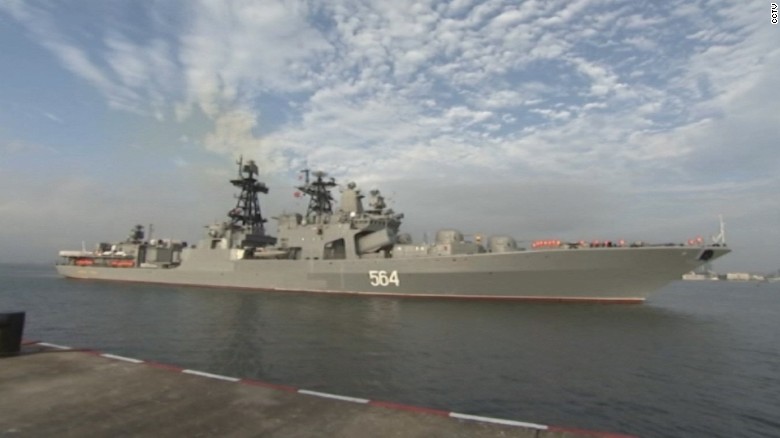 The Russian destroyer Admiral Tributs arrives for exercises with the Chinese navy.
“Russia has sent some of its best vessels, including the Ropucha-class landing ship, and the Udaloy-class destroyer” to participate in the exercises, according to Chinese state-run broadcaster CCTV.
The 7,500-ton Udaloy-class destroyers are designed for anti-submarine warfare, while the 4,000-ton Ropucha-class landing ships are designed to carry up to 24 armored vehicles directly onto beaches.
Contested waters
The China-Russia naval exercises are an annual event, with previous versions taking place in the Sea of Japan, the East China Sea and the Yellow Sea, among other locations.
But this year’s event in the South China Sea takes on new significance after a landmark ruling against China’s claims in the region.
The Permanent Court of Arbitration found China had unlawfully restricted fishing access around the Scarborough Shoal, a small but strategic reef and fertile fishing ground 130 miles (200 kilometers) west from the Philippine island of Luzon.
Then last week the Philippines military released images of Chinese ships it said were capable of dredging sand around the reef.
Beijing has denied it is reclaiming land, saying that while Chinese coast guard vessels patrol the waters around the shoal, which it calls Huangyandao, they were there for “law enforcement.” 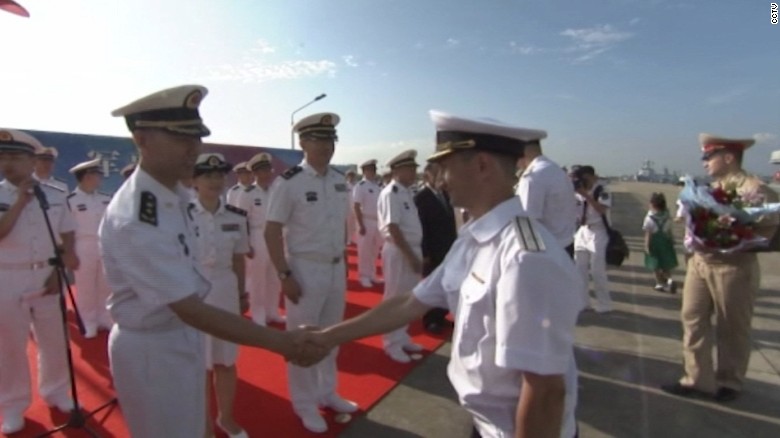 Russian and Chinese officers greet each other at the beginning of eight days of military exercises.
Territorial hotspots
Scarborough Shoal is only one point of tension in the South China Sea.
China claims almost all of the sea, including islands more than 800 miles (1,200 kilometers) from the Chinese mainland, despite objections from neighbors including the Philippines, Malaysia, Brunei and Vietnam.
Tensions have ratcheted up in the past two years as China has reclaimed land in massive dredging operations in the Spratly Islands, turning sandbars into islands equipped with airfields, ports and lighthouses.
In recent months, Beijing has reacted angrily to US freedom of navigation operations in the region, scrambling fighter jets and boats and denouncing the nation’s navies as “threatening Chinese sovereignty.”
When China announced the current naval exercises in July, it said it “does not target any third party,” according to the Xinhua report. 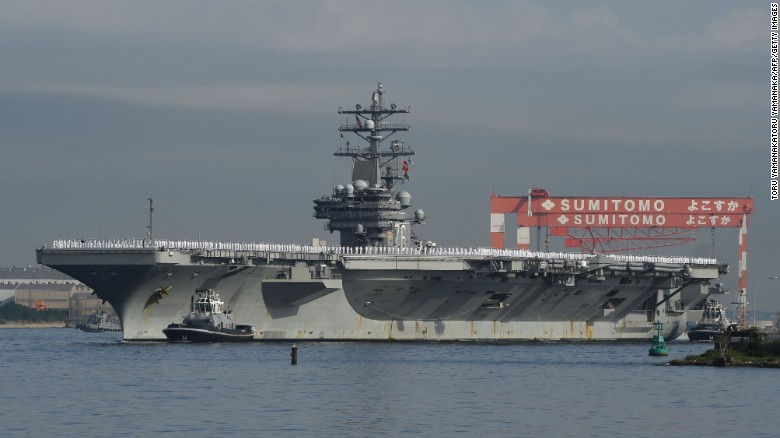