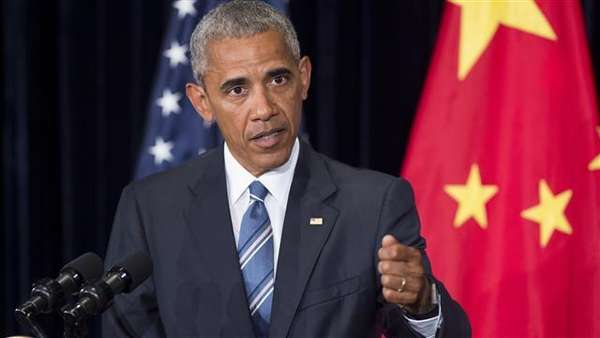 Colin Kaepernick’s decision to kneel during the national anthem was about the athlete exercising his constitutional rights, Barack Obama said on Monday.

Speaking at the G20 summit in China, the president said he supported the right of the San Francisco 49ers quarterback to protest against racial inequality in the United States.

Obama said he hadn’t paid close attention to the protest but said Kaepernick “cares about some real, legitimate issues”. Kaepernick’s protest has generated both criticism and praise, with some saying it is disrespectful to the military, an allegation that Kaepernick has denied.

Obama said the quarterback was the latest in a long line of athletes using their position to speak out on social issues. “My understanding, at least, is he is exercising his constitutional right to make a statement. I think there is a long history of sports figures doing so,” Obama said.

Kaepernick has said he will continue his protest until he sees “significant change” in the way black people are treated in the US. “Sometimes [protest is] messy and controversial and it gets people angry and frustrated,” Obama said. “But I’d rather have young people that are engaged with the argument and trying to think through how they can be part of our democratic process than people that are just sitting on the sidelines and not paying attention at all.”

Kaepernick has also pledged to donate $1m to community projects. “I don’t doubt his sincerity, based on what I’ve heard,” Obama said. “I think he cares about some real legitimate issues that have to be talked about. If nothing else, what he’s done is he’s generated more conversation about some topics that need to be talked about.”

There are signs that Kaepernick’s actions are starting to influence other athletes. His team-mate Eric Reid also sat out the anthem last week, while the first white athlete to join the protest, US soccer star Megan Rapinoe, did not stand for the Star-Spangled Banner during an NWSL game on Sunday.

“It was very intentional,” Rapinoe told American Soccer Now after the game. “It was a little nod to Kaepernick and everything that he’s standing for right now. I think it’s actually pretty disgusting the way he was treated and the way that a lot of the media has covered it and made it about something that it absolutely isn’t. We need to have a more thoughtful, two-sided conversation about racial issues in this country.

“Being a gay American, I know what it means to look at the flag and not have it protect all of your liberties. It was something small that I could do and something that I plan to keep doing in the future and hopefully spark some meaningful conversation around it. It’s important to have white people stand in support of people of color on this. We don’t need to be the leading voice, of course, but standing in support of them is something that’s really powerful.”

The San Francisco 49ers have supported Kaepernick’s right to protest and have chosen to keep him on the roster for the new season, where he will back up starter Blaine Gabbert. “Maybe his critics will start seeing that he has a point around certain concerns about justice and equality and that’s how we move forward,” Obama said. “Sometimes it’s messy, but that’s how democracy works.”