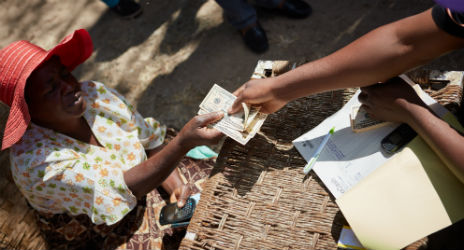 It has been six seasons since Patricia Nhauro’s family has harvested a viable crop. It has been even longer since her family has eaten three meals a day. “Probably not since before Mugabe was born,” Patricia says with a laugh, referring to Robert Mugabe, the 92-year-old President of Zimbabwe.

Sitting on the concrete stoop of a homestead she shares with her mother and seven children, Patricia says the family survived by selling off all their livestock, what non-governmental organizations refer to as ‘negative coping mechanisms’. But this year, with her home in Mudzi district in the grips of one of the worst droughts on record, they are struggling. “The situation is getting out of hand,” laments Patricia. “We managed to salvage some cow peas and ground nuts from the fields, but they won’t last for long.” It has now been four days since they have eaten anything substantial.

Based on preliminary results from the recent Zimbabwe Vulnerability Assessment, 4 million people, or approximately 42 per cent of rural households, are food insecure, due to failed rains and a strong El Niño. Maize production, a staple in this southern African country, has dropped, pushing prices 17 per cent higher than the same time last year (FEWS NET).

Unable to harvest this year – “absolutely nothing,” asserts Patricia – and with no income, she watches the children as they lie, lethargic, on a mat. “Their health is being affected. They have little energy. And, at the moment, I can’t afford to send them to school. I feel I am failing as a parent.”

In response to the drought, the Zimbabwe Red Cross Society, with the support of the International Federation of Red Cross and Red Crescent Societies (IFRC), is helping people like Patricia and her mother through mobile cash transfers. Both widows have been identified by their community as being among the most vulnerable. “The Red Cross came to our community and we were picked to receive assistance,” explains Patricia. “We were given a line by Econet, the mobile cash provider and, for the last four months, we have been getting money sent to the phone.”

After receiving a text message, Patricia heads to the distribution point to collect her $40 US dollars. After having her identification checked, and four crisp $10 American bills in her hand, she heads promptly to the nearby market. On this particular day, the family will eat well. “Being given cash, it gives me a choice,” says Patricia. “If I’m only given food, just a bag of maize only, what else will I do? Then I don’t have cooking oil, or salt, in the home. The bag of maize would not help me as much.

“This money has made a lot of difference. It’s quite different from going on a hungry tummy every day. We are very thankful for the support we have received.”

Back at home, as she watches one of her chickens dying in front of her, another victim of the drought, this single mother cannot help but wonder what will happen when the aid dries up. “We are leaving it to God,” she says quietly.

In May 2016, the IFRC announced a 110 million Swiss franc initiative to tackle the drought that is currently affecting tens of millions of people across southern Africa. The plan will see Red Cross relief activities increase significantly in seven of the hardest hit countries, alongside a dramatic expansion of long-term efforts designed to strengthen the resilience of 1 million vulnerable people.

The initiative falls under the One Billion Coalition for Resilience – an IFRC-led initiative that is bringing together aid organizations, governments, the private sector, academia and community groups to support 1 billion people over the next ten years to take action to strengthen their safety, health and well-being.

In Zimbabwe, the IFRC has increased its Emergency Appeal to 5.1 million Swiss francs. The Appeal aims to support the Zimbabwe Red Cross Society in reaching 38,330 people affected by the drought through interventions focusing on livelihoods, cash transfers, and nutrition. The Appeal is currently 33 per cent funded.