Whether leavers like it or not, Europe has a say on how Brexit will happen 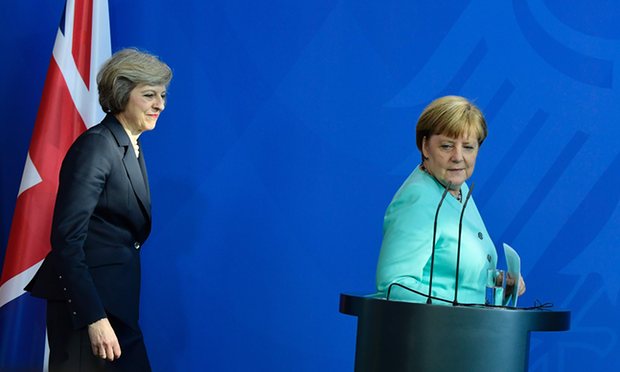 One thing was missing from Britain’s referendum debate over Europe: Europeans. We argued and wrestled for months over the nature of our relationship with the continent, while the continent remained silent.

That was partly out of tact on their part. Europe’s politicians understood that so much as a raised eyebrow in the wrong place would have been interpreted as unacceptable meddling in British affairs and played straight into the hands of the Brexiteers. So they confined themselves to vague statements of affection and repeated the formula that this was a matter for the British people to decide.

Now that the decision is in, that restraint no longer applies. Via a survey conducted by Bloomberg , the other 27 member states of the EU have been vocal in conveying the terms on which they would allow a post-Brexit Britain privileged, preferential access to the single market. The bottom line is that Britain will have to accept free movement of people: put simply, if the UK wants to sell its goods and services into the single market on favourable terms, our European neighbours will demand we accept unlimited migration of EU citizens.

Back then we blithely talked about the Norway model, sometimes tweaking it as if it were solely up to Britain to decide
According to Bloomberg, France will be especially hardline. If Theresa May merely seeks “passporting rights” for UK banks – so that financial services have premium access to the single market, even as the rest of the British economy does not – the price will be free movement.

That’s quite a contrast with what some of the leave folk were promising during the referendum campaign, when the likes of Boris Johnson were sunnily insisting that we could both have our cake and eat it – that we could leave the EU, ditch free movement and carry on trading with the single market as freely as before. After all, the Brexiteers declared, those Europeans needed us far more than we needed them, and they would soon be falling over themselves to give us a perfect deal, granting us all the benefits of EU membership and none of the costs.

Just as breezily, some leavers told the British public that there would always be the Norway option to fall back on. If the worst came to worst, we could simply join the European Free Trade Area and, along with Norway, Iceland and Lichtenstein, get full access to the single market without being part of the EU. Remainers countered that if we did that, we’d still be bound by EU rules, though now we’d have no say in drafting them, but that was swatted aside.

Yet now it emerges that even that Norway option might not be available. “It’s not certain that it would be a good idea to let a big country into this organisation,” Norway’s European affairs minister, Elisabeth Vik Aspaker, told the Aftenposten newspaper. “It would shift the balance, which is not necessarily in Norway’s interests.”

Both these interventions, with the Europeans offering their view of how Brexit might play out, have been a useful reminder of something that was too often forgotten during the in-or-out campaign: it’s not all about us.

Think the north and the poor caused Brexit? Think again
Back then we blithely talked about the Norway model, sometimes tweaking it as Norway-plus or Norway-minus, as if it were solely up to Britain to decide. We chose to forget that when it comes to our relationship with Europe, there is more than one party. That’s why it’s called a relationship: there are other people involved.

In the EU case, there are at least 27 other parties involved, each with a veto. The Bloomberg survey makes clear that post-Brexit negotiations will be a game of 27-dimensional chess. Theresa May won’t be able simply to stitch together a deal with Angela Merkel. She’ll have to accommodate, say, Spain’s wish for joint sovereignty over Gibraltar or Denmark’s desire for reciprocal fishing access. The eastern European states will demand that Britain make a financial contribution to the EU in return for privileged single market access. And on it will go, times 27.

The irony is that, once this process begins in earnest, once the horsetrading and haggling gets under way, we’ll begin to see what the best possible deal would look like. We’ll have a sense of the ideal arrangement, one that would give us free access to the single market, a say over the rules and a sharply reduced membership fee. We’ll cross our fingers and hope our European neighbours are generous enough to grant it. What arrangement will it be? Why, the one we had in our hands, right up until 23 June 2016.