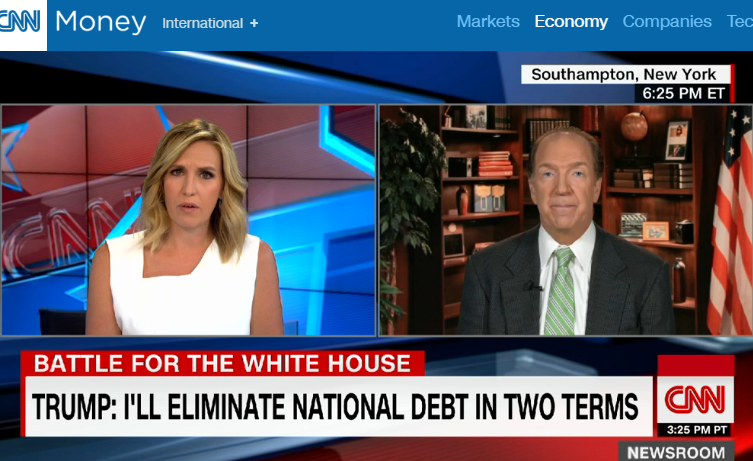 Calling it a plan to “winning the global competition,” Donald Trump will lay out his economic vision in Detroit on Monday.
The Trump doctrine calls for lower taxes, better trade deals, fewer regulations and more domestic energy production. Much of it is in line with traditional Republican economic orthodoxy, though the billionaire businessman throws in a few curves, particularly on trade.
Here’s what we know so far:
On Tax cuts and government spending
1) Trump has proposed massive tax cuts that are estimated to reduce tax revenue by more than $10 trillion over 10 years, according to independent analyses.
2) Some advisers have promised that he’d revise his tax plan to reduce that headline cost.
3) He’ll propose at least one new tax cut in his speech Monday: He’d exclude money used to pay childcare expenses from tax.
4) Trump also wants to kill the estate tax and drastically cut business income taxes to 15%.
5) While everyone would see a tax cut under his original tax plan, the highest-income households would benefit the most by far.
6) Tax cuts can be good for economic growth, but not if they lead to very big deficits. That’s because deficits can “crowd out” private investment and push interest rates higher. Plus, businesses and investors know that taxes will go back up eventually.
7) While reduced spending can offset the cost of tax cuts, Trump’s proposed spending cuts won’t make much of a dent because he’s focused on cutting funding from very small parts of the federal budget (e.g., EPA and Planned Parenthood). His campaign also says he’d save money by getting rid of Obamacare. But that’s not at all guaranteed since it’s not clear what he’d replace it with.
8) Trump has vowed not to touch Social Security or Medicare, which makes up the bulk of federal spending going forward.
9) And he wants to boost spending in some areas, particularly infrastructure. He said he’d spend twice as much as Clinton.
(Note: Trump adviser David Malpass backed off on the idea of eliminating the debt in 8 years, which Trump told the Washington Post he could do.)

On energy production:
1) Trump wants to rescind all Obama executive actions on climate matters and stop all payments to U.N. global warming programs.
2) Lift restrictions on American energy production. Allow oil and natural gas production in the offshore coastal waters under federal control. Ask TransCanada to renew its permit application for the Keystone Pipeline.
3) Even with those restrictions under Obama, there has been a massive oil boom in the past eight years. The U.S. was pumping 5.1 million barrels per day in January 2009. Now it’s 8.9 million barrels, up 74%.
4) The U.S. is now the world’s No. 1 petroleum producer when you count not just crude but also liquified natural gas. Even just counting crude oil, the U.S. is No. 3, narrowly behind Russia and Saudi Arabia.
5) More supply has helped sink oil prices…which means oil companies can’t make money. This has led to 200,000 job cuts. Opening up more land won’t lead to more drilling unless prices go back up.
6) Trump has promised to “save” America’s long suffering coal industry by pulling the plug on Obama’s “job-destroying” executive actions and cutting funding for the EPA.
7) Cutting regulations could help ease pain in coal country, but won’t be nearly enough to save coal from its biggest threat: cheap natural gas. In fact, Trump’s energy plan calls for encouraging already-robust natural gas production, an outcome that would only add to the enormous pressure on coal.
Related: America’s biggest oil boom
Related: Trump could help — but not save — coal country
On trade:
1) Trump wants to renegotiate NAFTA, which Trump has threatened to pull out in the past. And that he would push for “fair” trade deals with China. He also would withdraw from the Trans-Pacific Partnership (TPP).
2) Label China a currency manipulator. China isn’t playing fair on trade in many ways. The No. 1 problem is the theft of U.S. business secrets and technology by Chinese companies.
Powered by SmartAsset.com

TAX CALCULATOR BY  TAX CALCULATOR BY
3) Apply tariffs and duties to countries that cheat. He has talked about imposing 35% tariffs on Mexican imports and 45% tariffs on Chinese imports.
4) This could risk a trade war, which would hurt big U.S. companies and raise prices for American consumers. In 1930, Congress imposed the Smoot-Hawley Act, imposing tariffs to protect farmers. It made the Great Depression much worse.
5) Trump would bring trade relief cases to the World Trade Organization and have the Commerce Department respond to trade violations.
6) Negotiate trade deals that provide a better deal for American workers, particularly in the manufacturing sector. But many of those American jobs aren’t coming back, regardless of policy: Today’s factory jobs require more training and skills, leaving less-educated Americans on the sidelines.
Related: The truth about trade, American jobs and Donald Trump
Related: How China doesn’t play fair on trade
Trump unveiled his team of economic advisers on Friday. It contained several of his donors, but no women.