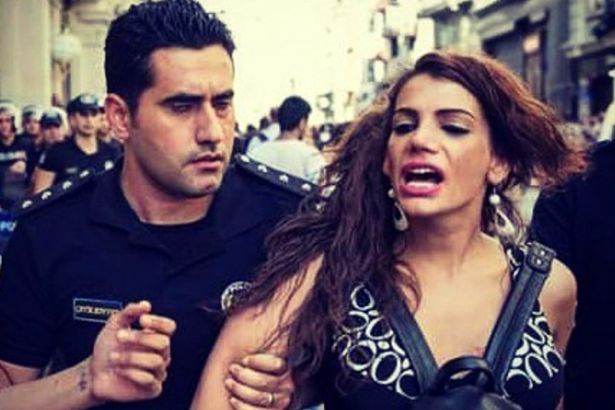 The badly-burned body of a young transgender woman who went missing last week has been found BURNT by the side of a road in Istanbul.

It is the latest in a series of hate crimes in Turkey shocking the LGBT and international community.

Sex worker Hande Kader was last seen getting into a client’s car – and her partner raised the alarm and filed a missing persons’ report when she did not return last week.

Despite being badly mutilated, the 22-year-old’s body – found in the upmarket neighbourhood of Zekeriyakoy – was finally identified by prosthetics at the city morgue.

Politically active, Kader had been photographed participating in protests and demonstrations for LGBT rights.

The body of sex worker Hande Kader was found burnt in the street
She had reportedly even been arrested for doing so on at least one occasion.

Kader’s friends took to Facebook in anger following the news of her death – one of them claiming that the “common mongrels” who had carried out the attack will one day “pay the price”.

Muhammed Wisam Sankari had settled in Istanbul after fleeing the ongoing conflict in Syria was found dead after having been raped and beheaded.

FacebookHande Kader, a young Turkish transgender sex workerHande Kader was also politically active
His body was so badly mutilated that he was only identifiable by the clothes he was wearing.

The Turkish city has been a haven for many fleeing persecution and war in neighboring Syria and Iraq – however hate crimes against LGBT people have soared recently.

Last week in the southern city of Mersin, a transwoman survived an attack by knife-wielding thugs.

Friends of Hande Kader are desperately upset about what happened to her
And a gathering is being held this evening in Istanbul’s Taksim Square in memory of the woman.

Although Turkey is traditionally seen as one of the most tolerant countries in the region, a recent poll by PEW Research Centre showed that almost 80% of Turks believe homosexuality is “morally unacceptable”.