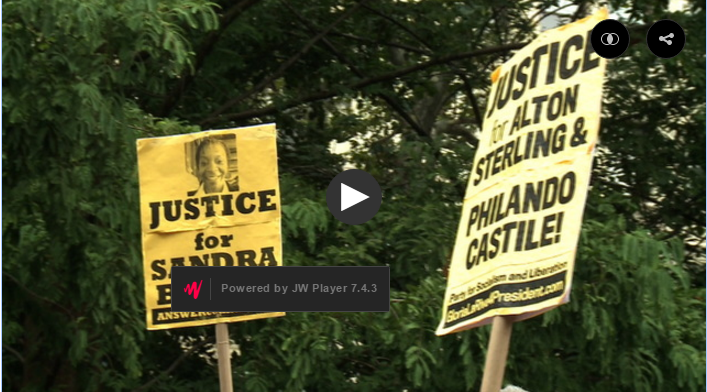 While all eyes have been on the Republican and Democratic platforms decided at the national conventions earlier this month, a broad coalition associated with the Black Lives Matter movement has released a platform of its own, demanding reparations and an “end to the wars against Black people.” The list of demands from the Movement for Black Lives platform also includes the abolition of the death penalty, legislation to recognize the impacts of slavery, as well as investments in education initiatives, mental health services and employment programs. The publication comes just a week before the second anniversary of the shooting of Michael Brown in Ferguson, Missouri, which sparked months of protests and catalyzed a national conversation about police killings of unarmed African-American men. For more, we speak with Ash-Lee Henderson, regional organizer for Project South and a member of the policy table leadership team of the Movement for Black Lives.

TRANSCRIPT
This is a rush transcript. Copy may not be in its final form.
JUAN GONZÁLEZ: Over the past two weeks, the Republicans and Democrats made headlines for finalizing their party platforms. Well, now a broad coalition associated with the Black Lives Matter movement has released a platform of its own, demanding reparations and an “end to the wars against Black people.” The list of demands from the Movement for Black Lives platform also includes the abolition of the death penalty, legislation to recognize the impacts of slavery, as well as investments in education initiatives, mental health services and employment programs. The publication comes just a week before the second anniversary of the shooting of Michael Brown in Ferguson, Missouri, which sparked months of protests and catalyzed a national conversation about police killings of unarmed African-American men.

Ash-Lee Henderson, welcome to Democracy Now! Talk about how you came together and what the Movement for Black Lives platform calls for.

ASH-LEE HENDERSON: Absolutely. Thank you for having me. So, we spent over a year having conversations with over 60 organizations, that reached thousands of people, to talk to grassroots community organizations about what they’re doing to build transformative demands for justice for black people in the U.S. and abroad. And what we spent the last year doing was synthesizing all of that information into a Vision for Black Lives. We know that many people have questions about what the Movement for Black Lives, what black people in the U.S., in particular, in this context, want, why we’re out protesting and why we’ve been protesting, not just since Mike Brown was murdered—definitely catalyzed in a new way, in a broader conversation—but even before then. Almost five years ago, when Trayvon Martin was murdered, people took to the streets in Sanford, Florida.

And what we know is that there’s a need for transformative justice, for demands that actually aren’t just Band-Aids on the big-issue problems that our communities are facing. And so, we wanted to put together a vision, a visionary platform, with transformative demands to not just reform the problem, but to transform the way that black folks are able to live and thrive and support themselves in our communities. And so, after that year process, we launched the Vision for Black Lives yesterday and are excited about giving communities the tools that they need to be able to actually fight and win those transformative demands.

JUAN GONZÁLEZ: And the issue of reparations, which is a part of that platform, that’s been debated and discussed now for a few decades. How would you see that being implemented, or did that discussion occur?

ASH-LEE HENDERSON: Absolutely, it occurred. We talked to organizations that have been fighting for reparations for decades, and learned a lot through that process—the National African American Reparations Commission, just to—as one example. And what we know is that, for years, Representative Conyers has been fighting for a study on reparations in the United States. And what we know is that there’s a quick transition—and maybe it’s not that quick, right? Folks have been fighting for this for decades. But definitely a transition into moving from a study to actually talking about what reparations would look like and implementing that work. So we think reparations is a call for not just government to do the work that they need to do to rectify harm to black communities, but also corporations and other complicit institutions that have harmed black people. And so, that is reflected throughout the many policy demands under our call for reparations in the United States.

AMY GOODMAN: I wanted to turn to a clip of the—of Hillary Clinton at the Iowa Brown and Black Presidential Forum earlier this year. Grantland contributor Rembert Browne asked her about reparations.

REMBERT BROWNE: Do you think 2016 is the year, kind of on the federal level, we should start studying reparations?

HILLARY CLINTON: I think we should—we should start studying what investments we need to make in communities to help individuals and families and communities move forward. And I am absolutely committed to that. There are some good ideas out there. There’s an idea in the Congressional Black Caucus about really targeting federal dollars to communities that have had either disinvestment or no investment and have had years of being below the poverty level. That’s the kind of thing I’d like us to focus on and really help lift people up.

ASH-LEE HENDERSON: Absolutely. I mean, what we believe is that investment into black communities and divestment from the institutions that harm black communities is important, but we also believe in reparations, that there can’t be reconciliation until there’s been truth and justice. And reparations is really a call for that. So, I think it would be really important. And what we’ve seen across the country is black people saying that we don’t want just a commitment to thinking about what might happen, to having conversations about potential ideas, but a call to action. What would be wonderful is if candidates that were trying to represent us on the municipal, state and federal level actually came with concretes about what they would do their first hundred days to implement calls for reparations, to put into place the solutions that communities have been calling for, again, for decades. So, we still stand in strong unity in a demand for reparations for black people in the United States.

JUAN GONZÁLEZ: And how do you envision using the platform, that’s been approved now at the local level, as we enter this obviously hotly contested election cycle?

ASH-LEE HENDERSON: Absolutely. So, I think that one of the important things to think about on the local level is the Vision for Black Lives as a tool. So this is, again, a platform that lifts up transformative demands. And on the local level, that can look like calling for community control of the institutions that are supposed to be serving your community, so whether that’s community control of the police or community control of your school board and schools, any of the institutions that are supposed to be created to serve your community. We also think that the demands around investment into communities and divestment from the systems that harm us is definitely a municipal, local demand. So, whether that looks like divestment from militarized policing and investment in black futures, there are so many ways that it can play out.

And so, the way that the platform is designed is that there are the broader demands around invest/divest, around reparations, around community control, economic justice, political power, etc., and there are state, local and federal demands with concrete policy examples, model policies, that you can see and take and develop in ways that are useful for your community. We also put in a lot of time doing research about what’s already been done, and are encouraging people to read it, because sometimes things like body cameras, things like community policing sound really great, but don’t actually work to stop the harm in black communities. So we put in some level of critique about whether this is playing out in ways that black people locally are supporting. And so, we definitely want people to use it on the local, state and federal level.

AMY GOODMAN: Well, Ash-Lee Henderson, we want to thank you so much for being with us, of Project South, policy table leadership for Movement for Black Lives. We’ll link to your platform at democracynow.org.