Jose Luis Dominguez works at a restaurant across the street, making him available to pick up and drop off his children 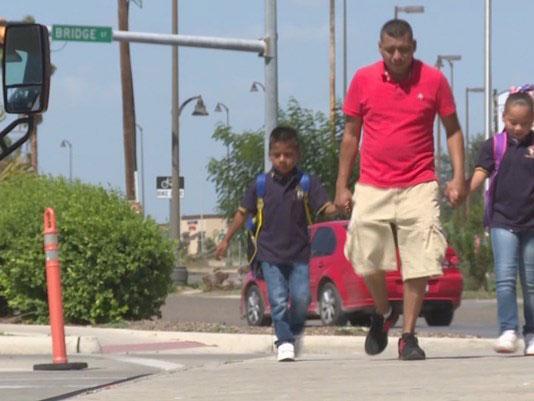 Braving the scorching heat of the Texas sun, one father makes a daily border crossing from Mexico with his two children, just so they can receive a good education.

Jose Luis Dominguez, 32, says that the school in the border town of McAllen are much better than those offered in his Mexican town.

“I bring them to school every day,” he told KENS5. “We cross the border so they can have a better education, because schooling is better here than in Mexico.”

Mr Dominguez said he has taken the mile-long walk with his kids, Luis, 7, and Kayla, 8, for two years. They attend a school across the street from his job at a Texas fast food restaurant.

It is not uncommon for Mexican families who live in border towns to take their children to US schools – all they need is proof of a physical address in the US.

Much of the focus placed on Mexico centres on the drug violence that plagues the country, especially along the boundary with the US.

And for Mr Dominguez, the safety of his children is top priority.

“It’s ugly across the border,” he said. “Kids are being abducted. It’s better here [in the US], safer, knowing that nothing will happen.”

Border crossings have been the topic of debate throughout the US presidential election. Donald Trump launched his campaign on the promise of building a wall between the 1,900-mile border with Mexico. While he has apparently said he would “soften” his approach to immigration from Mexico in recent days, he has talked about the overwhelming dangers of traffic from Mexico throughout his campaign.

Mr Dominguez, however, simply wants to give his children a proper – and safe – education.