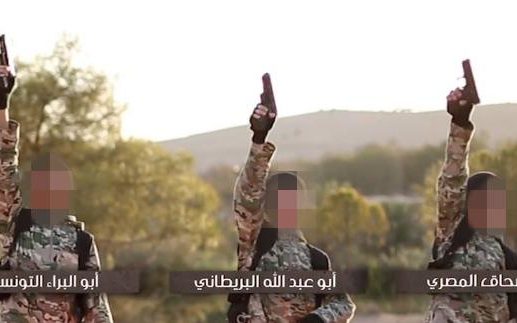 In the video the light-skinned boy appears dressed in military fatigues and a black bandana CREDIT: @RAQQA_SL

The young British boy who appeared in an Islamic State propaganda video in which he apparently executes a prisoner has been identified by his father.

He is thought to be Joe George, the son of Sally Jones, a former punk rocker and mother-of-two from Chatham in Kent who took him to Syria in 2013 when he was 10 years old.

JoJo, as he is known by his family, would now be around 13 years old.

In the video the light-skinned boy appears dressed in military fatigues and a black bandana, identified by the nom-de-guerre Abu Abdullah al-Britani.

He is seen shooting an Isil prisoner, dressed in an orange jumpsuit, in the head.

“He was brilliant, just a normal boy – always chasing bugs, going down the park,” JoJo’s father told the Mail on Sunday, declining to be named. “I have had to block it out. It’s been hard, we just have to carry on. It’s disgusting he’s been brainwashed.” 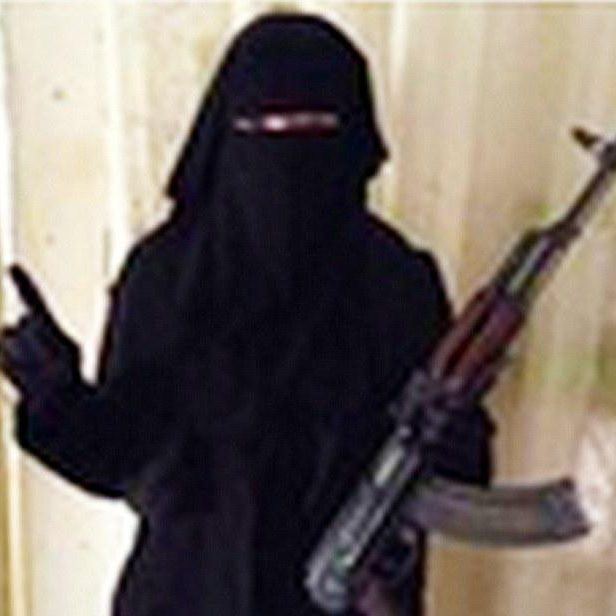 An image from Sally Jones’ twitter account which purports to show her posing with an AK-47 rifle
Sally Jones, who had been a guitarist in a punk band, separated from the father after his birth in 2004. Shortly after she converted to Islam.

She left for Raqqa, the capital of group’s self-proclaimed caliphate in Syria, and soon after married Junaid Hussain, an Islamic radical and hacker 25 years her junior. He was killed in a US drone strike last year.

Using the pseudonym Umm Hussain al-Britani Jones posted pictures of herself wearing a black niqab and holding an AK-47, saying she wanted to behead Christians with a “blunt knife” and praised Osama Bin Laden.

JoJo is the second British child to appear in the Islamic group’s propaganda videos.

Research earlier this year estimated up to 50 British children are being bought up in the self-styled caliphate of Islamic State in Iraq and Levant (Isil), after being taken to the region by their parents.

The Isil economy
Despite coalition airstrikes and historically low global oil prices, Isil maintained a high level of revenue in 2015 due to its diversified economy. Researchers at the Center for the Analysis of Terrorism estimate that the group’s revenue came to about £1.9 billion last year and can be broken down as follows:

Extortion: In 2015 extortion became Isil’s greatest source of income, accounting for £616 million, or about a third of total revenue.

Kidnapping and ransom accounted for £77 million or four per cent of Isil’s 2015 income.

Antiquities: Isil controlled about 7,000 archaeological sites in Iraq and Syria in 2015. Antiquities trafficking was the source of £23 million of the group’s income for the year.

Oil: Isil’s total oil production in 2015 was estimated at 40,000 barrels per day, accounting for £460 million in revenue, or about a quarter of total income.

Natural gas: The group controlled at least 12 natural-gas fields, bringing in £270 million, or 14 per cent of its annual income.

Phosphate: Output from Isil’s phosphate mines in Iraq and Syria accounted for £193 million, or 10 per cent, of its total income in 2015.

Agriculture: Fertile land in Syria and Iraq meant that Isil’s trade in cereal crops and cotton accounted for £118 million, or six per cent, of its 2015 revenue.

Cement: Isil controls several important cement plants. In 2015 cement brought in £77 million, or four per cent of its revenue.

Donations: Isil receives donations from wealthy businessmen and religious institutions. These accounted for some £38 million, or two per cent, of its 2015 income.

Source: Center for the Analysis of Terrorism