Facebook To Gun Dealers: It Doesn’t Matter If You Have A License 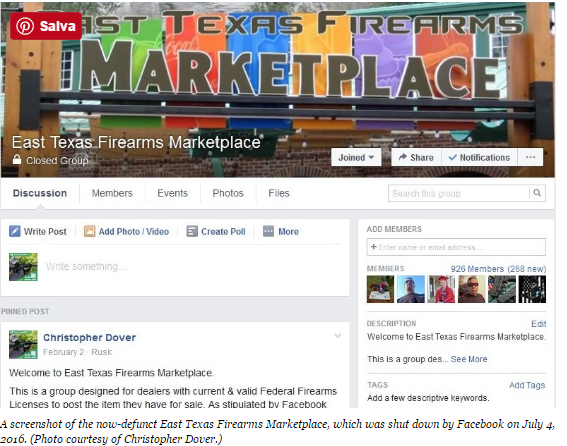 Christopher Dover thought he was following the rules.

A trained firearms instructor in eastern Texas, Dover had set up a Facebook FB +0.13% group for gun dealers to advertise their weapons, something the social media giant said it would continue to allow when it banned private party gun sales in January. Dover titled the group “East Texas Firearms Marketplace,” and invited federally licensed gun dealers in the area to join. Soon, the group had attracted 16 local dealers, whose posts reached more than 900 members subscribed to the private page. “It was a different kind of group,” Dover explains, and one that was poised to grow in the wake of Facebook’s more restrictive rules aimed at eliminating unregulated gun sales that are common on the site. But a subtle change to the company’s policy–made without any public announcement–all but assured that wouldn’t happen.

Unlike most Facebook groups dedicated to the buying, selling and trading of guns and ammunition, Dover’s required each post to be approved by an administrator before going up. He says he only approved posts from dealers who provided a valid copy of their federal firearms license, or FFL, along with their contact information and hours of operation. (Dover provided screenshots to FORBES of individual firearms licenses that he displayed to the group in a photo album.) By limiting sale posts to licensed dealers, which are required to conduct background checks, and restricting comments on posts to force potential buyers to contact the seller directly, Dover thought he was keeping the group in line with Facebook’s policy, which until recently prohibited “any attempts by unauthorized dealers to purchase, sell or trade … firearms or ammunition.”

What Dover didn’t know when his group was shut down the morning of July 4 is that Facebook had quietly changed its policy. The current policy makes no mention of dealers, unauthorized or otherwise. Instead, it now reads: “We prohibit any attempts by private individuals to purchase, sell, or trade prescription drugs, marijuana, firearms or ammunition.” With just two new words–“private individuals”–it’s small as policy changes go. But it may help explain why Dover’s group, which he says was “110 percent compliant” with Facebook’s new rules, was shut down without warning.

A Facebook spokesman said the change to the policy was made in June, and that enforcement remains focused on individuals–regardless of whether they are licensed to sell guns and, as a result, required to conduct background checks. “It’s intended to keep peer-to-peer sales off Facebook,” spokesman Alec Gerlach told FORBES. “To alleviate confusion, we changed the wording.” For anyone wondering if they are covered by the policy, Facebook’s FAQ page goes a bit further: “Firearm shops and online retailers are allowed to engage in commercial activity involving firearms and ammunition on Facebook (ex: offering a gun for sale) as long as all applicable laws and regulations are followed.” 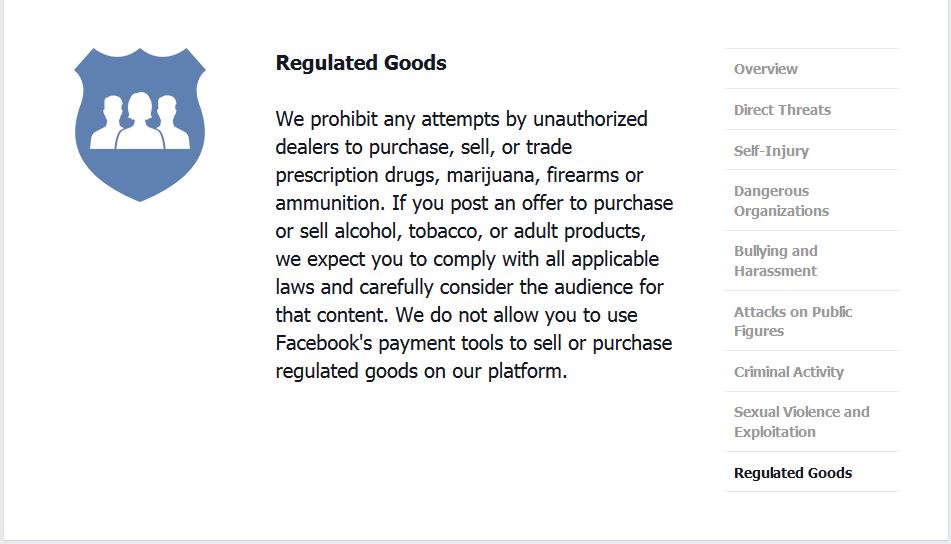 In other words, a dealer could be legally licensed to sell guns out of their home, often referred to as a ‘kitchen table dealer,’ but Facebook wouldn’t allow them to advertise guns on the site unless they were an online retailer or operated a traditional brick and mortar storefront. “It’s obviously not meant to include someone who has an FFL and is selling guns out of the back of their truck,” Gerlach said. It’s unclear how many of the roughly 140,000 federally licensed gun dealers in the United States operate from a home address, but the figure is likely significant. A 1998 survey by the Bureau of Alcohol, Tobacco, Firearms and Explosives found that 56 percent of all dealers operated out of their homes. So how does Facebook distinguish one type of gun dealer from another?

“It’s a case by case basis,” Gerlach said, adding that once a page or posting is flagged for removal, a member of Facebook’s content policy team “goes through and tries to learn about the business. If it looks like a legitimate business, it’s allowed.” Gerlach declined to detail Facebook’s criteria for determining whether a business is legitimate, and would not discuss the specifics of why Dover’s group was shut down.