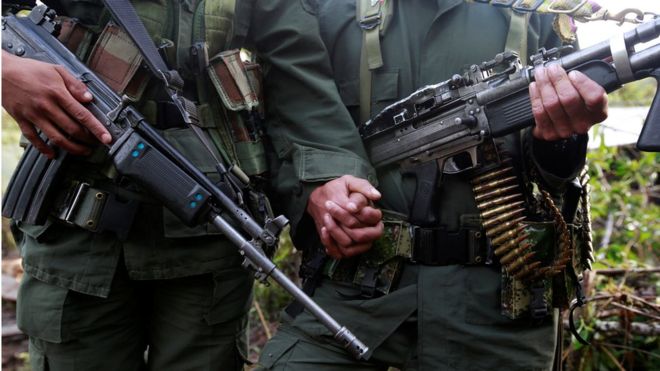 The main rebel group in Colombia, the Farc, is to announce a definitive ceasefire on Sunday taking effect at midnight (05:00 GMT Monday), at the same time as a government ceasefire.
The two sides signed a historic peace accord in the Cuban capital Havana on Wednesday after 52 years of conflict.
Farc fighters will gather in mid-September for a “conference” to ratify the accord.
A Colombian referendum on the agreement will follow on 2 October.
The Farc’s conference will be its tenth since 1965, and will be held in a remote region of southern Colombia between 13 and 19 September.

Hundreds of Colombians celebrated on the streets of Bogota after the signing was broadcast live from Havana, Cuba, where peace talks have been held for almost four years.
The conflict has killed an estimated 260,000 people and displaced millions.
President Juan Manuel Santos called the deal “the beginning of the end to the suffering, pain and tragedy of war”.

At one end of the main table, occupying a place he has filled for more than four years, was a slender, bald man with a well-groomed moustache. He listened respectfully to the anthem without singing along although by now he probably knows the words.
But it is not his country’s song. He is Dag Nylander, head of the Norwegian diplomatic team which – along with the hosts, Cuba – acted as guarantors for the Colombian peace process.
For long-standing observers of Colombia’s negotiations, Mr Nylander is a familiar sight. He has been a ubiquitous presence at every key moment over the past few years, reading out the details of the accords in his flawless but accented Spanish. At points of high tension or finger-pointing, he seemed to bring a calming presence to the proceedings, an external voice and a Norwegian sense of order to an entangled and bitter dispute.
I caught up with him after the heady sense of elation of that night had subsided a little.

The two sides had signed a bilateral ceasefire in June, paving the way for a final agreement.
Under the terms of the agreement, the Farc will give up its armed struggle and join the legal political process.

The left-wing rebels have been fighting the government since 1964.
It is the longest-running conflict in Latin America.