Battle for Sirte: Effort to recapture ISIL’s last base in Libya reaches endgame 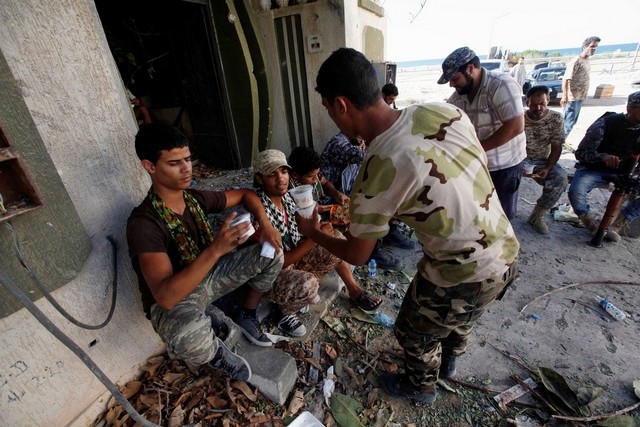 The battle for ISIL’s last base in Libya has reached its endgame, as the US intensifies air strikes on Sirte and forces aligned with the UN-backed unity government drive deep into militant-held suburbs.

Fighting broke out on Thursday in District One, the last section of the coastal town held by the militants, who are fighting back with sniper fire and attempted suicide bombings.

Libyan ground forces, mostly units from Misurata that are aligned with the Government of National Accord (GNA), first entered the town on June 9, but soon became bogged down in street fighting. On August 1, America launched its Operation Odyssey Lightning bombing campaign to support the ground forces, which may prove to be the key to their victory.

The Pentagon said that as of Thursday a total of 57 air strikes had been launched by drones and Harrier jets operating from an American amphibious assault ship in the Mediterranean.

Then on Tuesday, the United States unleashed its heaviest strikes to date, announcing nine bombing missions. Three of the missions struck 19 ISIL fighting positions and four targeted vehicles rigged as suicide bombs, while the other two hit a command vehicle and a truck-mounted artillery weapon. Videos released by the Pentagon show an ISIL jeep hit as it was moving, the blazing vehicle crashing off the road. The strikes enabled ground forces to push towards the shore, leaving the militants with their backs to the sea.

At that point the Pentagon estimated that no more than 350 ISIL fighters remained in Sirte – this from a force it put at 6,000 in February. But the militants continued to put up stiff resistance.

On Wednesday, ISIL sent volunteers in cars and jeeps packed with explosives towards the Libyan lines. However, at least two such vehicle suicide bombs were destroyed by Bonyan Al Marsous fighters before they reached their targets.

Further east, meanwhile, a parallel battle against ISIL was grinding on, as forces loyal to the Tobruk parliament – which does not recognise the GNA – fought for control of two militant-held suburbs of Benghazi, Ganfouda and Gwarsha.

Clouding the picture further is the fact that in July France said it had deployed special forces to Benghazi to assist Tobruk. It made this revelation after three of its personnel were killed in a helicopter crash.

In both the battle for Sirte and the battle for Benghazi, Libyan forces have been handicapped by a lack of accurate artillery and mobile armour to protect their units within the town and city’s dense networks of buildings and rubble.

Their primary vehicles have been unarmoured pickup trucks with machine guns or rapid-firing cannon bolted to the flatbed, leaving their crews at risk from snipers firing from rooftops.

As pro-GNA forces advanced in Sirte, they discovered a labyrinth of tunnels constructed by ISIL, seizing documents and computer hard drives with valuable intelligence.

On Sunday, the GNA said it had passed documents to Italy that were found in the Sirte rubble, detailing an ISIL network operating in Milan.