Theresa May: Palestinians must have “full civil rights” 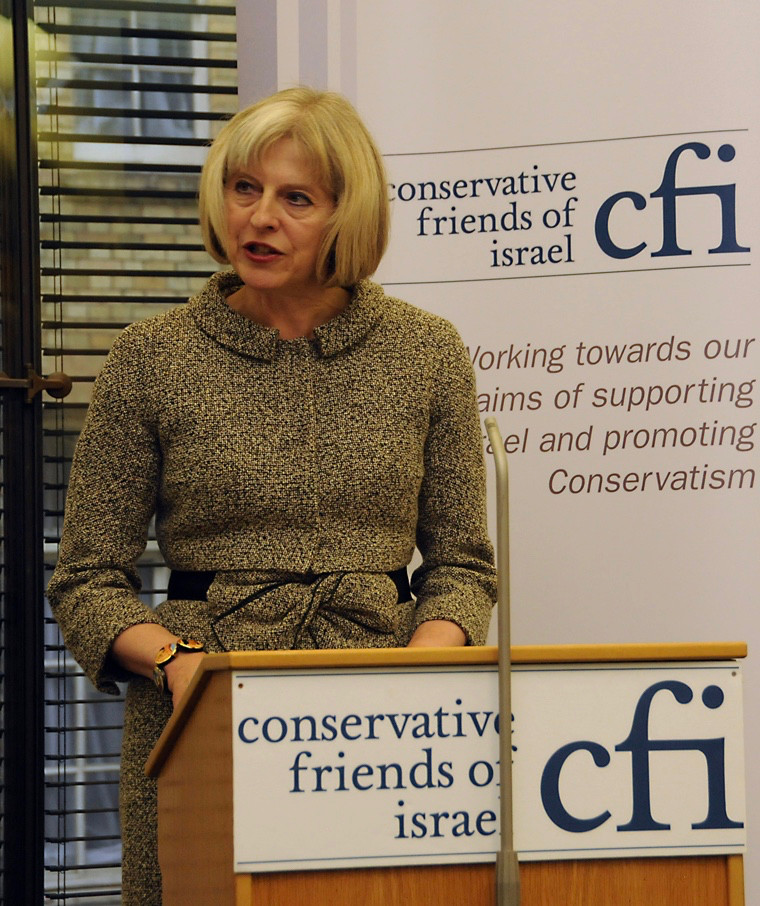 Theresa May’s
elevation as UK prime minister, following the resignation of David Cameron, has
been welcomed by supporters of Israel.
UK lawmaker Mike
Freer, an officer with the parliamentary grouping Conservative Friends of
Israel, has described May as a “true friend of
Israel.”
As home secretary, or
interior minister, since 2010, May has had ample opportunity to demonstrate
this.
In 2011, she moved to
deport Raed Salah, a Palestinian citizen of Israel
and the leader of the Northern Branch of the Islamic Movement, from the UK.
Unbeknownst to Salah
or his hosts, May had issued an order banning him just two days
before he entered the country for a speaking tour.
Rather than be
deported, Salah chose to remain in the UK on bail and fight May’s order in court.
As The Electronic
Intifada reported, May’s claim that Salah had written an anti-Semitic poem was based on fabrications provided by an Israel lobby group.
Ten months later, a
UK court overturned the ban, finding no evidence to
support it and completely vindicating Salah.
The defeat for May
was also a setback to the government’s broader counterterrorism strategy known
as Prevent.
Fourteen pages from
the Conservative government’s updated Prevent policy were submitted to the courts as evidence
against Salah.
Government lawyers
argued that Salah’s alleged words could lead to “radicalization” and terrorism.
But the judge
dismissed this reasoning.
Fear and prejudice
Launched by a Labour
government and bolstered by May’s Conservative Party, the Prevent strategy has
come under severe criticism.
Earlier this year,
the UK’s terrorism watchdog called for an independent review of the
policy over concerns that it was “sowing mistrust and fear” in Muslim
communities and was ineffective.
While billed as
promoting “community engagement” to spot and stop
“radicalization,” Muslim communitiesexperience Prevent as pervasive
surveillance and political monitoring that fosters self-censorship, prejudice
and stigma.
The program has
resulted in thousands of children being reported to
authorities by teachers.
In one case,
kindergarten staff threatened to refer a four-year-old boy
after he drew a picture of his dad cutting a cucumber with a knife. Teachers
claimed the boy said the picture was of a “cooker bomb.”
In another case, in
February, a schoolboy was questioned by anti-terrorism police for
wearing a “Free Palestine” button to school.
Last year, dozens of
academics signed a letter saying that Prevent’s conception
of “ ‘radicalization’
and ‘extremism’ is
based on the unsubstantiated view that religious ideology is the primary
driving factor for terrorism.”
They warned that
Prevent “will have a chilling effect on open debate, free speech and political
dissent” and would “create an environment in which political change can no
longer be discussed openly, and will withdraw to unsupervised spaces.”
“Prevent will make us
less safe,” they concluded.
In 2011, the human
rights group Liberty said Prevent’s “gravest error was
blurring the lines between dissent and criminality and between civil society
and security agencies.”
But in 2015, May put
forward even tougher counterterrorism legislation that Karma Nabulsi, a
Palestinian commentator and professor at Oxford University, termed an “attack on the very foundations
of democracy.”
Undeniable
May’s move to ban
Raed Salah from the UK was prompted by a report from the Community
Security Trust (CST), an Israel lobby group with close ties to the Conservative
Party.
In a statement on Monday, Conservative Friends
of Israel touted May’s strong support for Israel and the UK Jewish community
throughout her public life.
This has included
working with CST and other organizations to “tackle anti-Semitic attacks.”
Conservative Friends
of Israel chair Eric Pickles, a British minister who has led the charge against the Palestine solidarity
movement, said that “Israel can rest assured that a UK led by Theresa May will
be there in its moments of need.”
Conservative Friends
of Israel pointed out that in reflecting on her June 2014 visit to Israel, May
had backed Israel’s “right to defend itself.”
During a speech to the group in September 2014,
May repeated platitudes about Israel being “democratic,” as well as standard
talking points justifying Israeli violence – that “Hamas uses Palestinian
civilians as human shields for its rockets.”
Conservative Friends
of Israel highlighted these statements with satisfaction after May won the
Conservative Party leadership this week and was set to enter 10 Downing Street,
but failed to note something else she had said in her September 2014 speech.
“Those of us who are
sympathetic to Israel’s security predicament must always make clear that the
loss of any civilian life – whatever the nationality of the victim – is an
appalling tragedy,” May said. “And we must remember that there will be no
lasting peace or justice in the region until the Palestinian people are able to
enjoy full civil rights themselves.”
Those words should
not be taken as any measure of sympathy for Palestinians, but rather as a sign
that the fundamental causes driving the ongoing conflict are so clear that even
a staunch supporter of Israel like Theresa May cannot deny them.