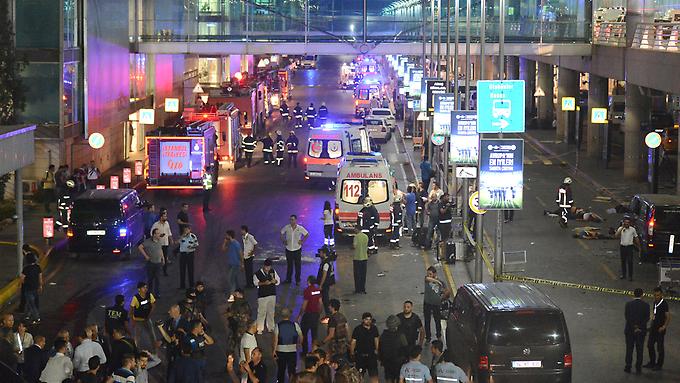 by Milena Rampoldi, ProMosaik, 4 July 2016.
God is dead.
This is what Friedrich Nietzsche wrote in his Aphorism 125
of the Fröhliche Wissenschaft. The
consequences are a theology without God and believers without God.
All this applies to Western philosophy – at least this is
what I thought when I was young. And the work by Karl Löwith “Von Hegel zu Nietzsche” convinced
me that I was right. I thought that God’s Death was a typically Western
problem.
But now, after the umpteenth terrorist attack against
civilians in Turkey I have started to think that also Allah died. And that he
remains dead. And that they have killed Him.
The consequences: an Islamic theology without Allah and
Muslim believers without Allah.
In my opinion, this is the best way to explain the
self-proclaimed “Islamic
State”, the so called Syrian-Iraqi Sunnistan of Islamic Atheism and Nihilism
since theological explanations of the phenomenon fail to appear. And completely
detaching the phenomenon from Islamic religion would be irrational and
irresponsible because the warriors of the Islamic State define themselves as
Muslim, relate to Islam, refer to the Quran, and even believe they are better
Muslims with the right to define  Islamic
standards.
Without any doubt, a theology without God, in a monotheistic
context, means a theology without a Creator and without Life, because in
monotheism, and so also in Islam, Allah is the Creator (haliq) and source of all life. And
this IS theology without God is vehemently opposed to one of the main
principles of Islam, enunciated in Quran 5:32 where it says:

If Islam means life and belief in God, the Creator of Life,
then anti-Islam means nihilism and killing Allah, the Unique, and Only Creator,
“in the name of Whom” you read
and speak. “Iqra”
(read) and “qul”
(say) are two main monotheistic calls to all Muslims in the name of Life and
Islam as submission to Allah’s world order.
They who arbitrarily kill, violate Allah’s world order and
submits themselves to the vacuum He shot into this world. In this nihilistic
view of life, the kamikaze attack is to be seen as the logical consequence of
Allah’s killing. Allah’s killing is followed by the complete manipulation and
necrophile interpretation of Allah’s message
of life and light.
The jihad in the name of self-defence is transformed into a
sadistic aggressive war in which all means are justified to eliminate all
civilians of all religions and cultures because the fact that for this purpose
you blow yourself up to be catapulted into the Paradise of Nihilism, suffices
as justification. And the more innocent the victim, the better it is. Since for
these killers of a self-proclaimed takfiri sect the matter is to put
themselves over normal Muslims saying “salam”
to others and living a modest life, without choosing to play the anti-heroes of
a distorted Islam.
However, the nihilistic Anti-Islam without Allah is part of
ourselves, it is part of our Muslim society, all Muslims are part of, because
also these nihilistic killers of Allah are part of the Ummah, whether we like
it or not. Therefore, as Muslims we are primarily responsible for the determination
and solution of this set of issues. And we are responsible because we believe
in Allah, ar-rahman ar-rahim ar-ghafur.
Unfortunately, there are many causes explaining these
symptoms of a self-proclaimed caliphate of Allah-killers, and these causes are
even extremely diversified: on one hand, they are related to the geopolitical,
economic, and sociologic conditions of the countries, for which these people “according to their conviction” engage to create a more just
and more Islamic world order for the people living in the region.
Geopolitically speaking, the whole region of the Middle East is the sad result
of a post- and neocolonialist partition plan which pushed millions of people
into poverty, dispossession, insecurity, and ethnic and sectarian segregation.
Since the multicultural and tolerant Ummah, the recognition of diversity
according to Quran 5:48, dies with Allah:

“…If
Allah had so willed, He would have made you a single people, but (His plan is)
to test you in what He hath given you: so strive as in a race in all virtues.
The goal of you all is to Allah; it is He that will show you the truth of the
matters in which ye dispute”.

On the other hand, neither Marxism nor neoliberalism offer
an adequate economic solution to the region, because Islam has its own economic
solutions. Furthermore, unwavering U.S. support for Zionist colonial crimes with impunity of
the Apartheid state of Israel,
has caused extremely deep frustrations in the Muslim world of the Middle East
which is already in a deep existential crisis.
Equal opportunities, professional chances for young people,
female empowerment, education for all are a utopia in a region which has
already surrendered itself and where the word “inshallah”
is just drowned in fatalism. However, there is also a dynamic interpretation of
the concept “inshallah”
which could give these people back their self-conscience. In my opinion the
concept “inshallah” has to be
interpreted according to verse 11 of the sura al-rad where it says:

“… Indeed, Allah will not change the condition
of a people until they change what is in themselves.”

In this understanding, Islam means dynamics, addressing
challenges, optimism, and also personal battle of the soul for the good and
justice life and mercy.
The West constantly destabilises the region where Western
secret services, Islamophobic groups, and Western cultural colonialism are
considered responsible. In the heads of “distorted”
people, this situation justifies the war against everything and everybody:
Muslims must die because they are guilty of takfir and Western people
have to die because they are on the side of colonialists and have made the
Muslim world what it is now.
Where is the solution? In the understanding of the terrorist’s
psychology and in the struggle against external neocolonialism and the
connection between militarism and capital and the nihilism and radicalisation
of young people in Muslim societies in which they see themselves in a vacuum in
which Allah, the Creator of all Life is missing.
An urgent socio-pedagogic program to be implemented
worldwide is needed to put Muslims and Non-Muslims together to avoid the
radicalisation of young Muslims. Perhaps, instead of radicalisation, we should
say vacuumisation and nihilism. Unfortunately, every religion also has its
nihilism. And so every religion has its own God-killers. And this also applies
to Islam and the Muslim community, in particular in this difficult time
characterised by blind violence against innocent civilians.
Only preventive dialogue can solve the problematic complex
of “IS”,
“DAESH”
and its God-killers. What has to belong to this preventive dialogue, is also
the engaged struggle against Western militarism, the connection between arms
industry, capital, Zionism, neocolonialism, and wars in the Middle East and the
constructive struggle against islamophobia by the dialogue about Islam between
people and social groups.
What has not to be disregarded is that this is an obligation
of the whole society – Muslims and Non-Muslims – all over the world since only
by responsibility and involvement of all of us in this problematic set of
issues which concerns us all can bring a true, and sustainable solution for the
Middle East and the world. It is a long and difficult process, but if we do not
start to fill this vacuum with humanity and life, always new God-killers will
appear on the horizon with the same purpose but with different names.
The practical struggle against terrorism by national states
does not suffice. The solution of the problem does not consist of shooting down
terrorist. This is just the final result of this vacuum manifestation and the
reaction of the state when the terrorist and the police man look at each other
for a last time in a cul-de-sac before the wall of nihilism. However, it is a
matter of preventing the self-proclaimed Allah-warriors to kill the Islamic
culture of life and to kill Allah. It is not the matter of killing them after
that their distortion process has achieved the wrong goal and while they are
bleeding to death in front of this high wall in the cul-de-sac.
To achieve this goal, you need a socio-politically engaged
civil society. Security and police, Special Forces and struggle against
terrorism, military forces, infiltration and training of secret services and
terrorism experts in situ do not suffice because they just eliminate symptoms.
If they they sufficed, then terrorism would not be there anymore. However,
there is no successful war of the state against the causes of terrorism, but
only against its visible symptoms – when people blindly shoot around and when
the first perpetrators and the first victims lie on the marble floor of the
airport.
The causes of terrorism can only be eliminated in whole by
inclusion, education, economic and social development, equal opportunities, and
empowerment of the civil society. The opposite of nihilism is humanism, a
humanism existing in all religions and cultures, and which can fill all vacuums
with life, a Life which in Islam comes
from Allah and returns to Him. The German poet Johann Wolfgang Goethe
was right when he said:

“If Islam means submission to
God, we all live and die in Islam”.

Finally, I would like to mention the Verse of Light from the
Quran (24:35) because for me it is the symbol of the way Muslims should go
through their life in this world, without diametrically opposing East and West:

“Allah is the Light of the
heavens and the earth. The example of His light is like a niche within which is
a lamp, the lamp is within glass, the glass as if it were a pearly [white] star
lit from [the oil of] a blessed olive tree, neither of the east nor of the
west, whose oil would almost glow even if untouched by fire. Light upon light.
Allah guides to His light whom He wills. And Allah presents examples for the people,
and Allah is Knowing of all things.”