#GazaLives – 2 years after the war

by Palestine Solidarity Campaign, July 20, 2016. Marking two years since the brutal Israeli assault that killed more than 2,200 Palestinians, #GazaLives tells the stories of Palestinians living there, in their own words.

On 20th July 2014, as many as 150 Palestinians were killed in Shuja’iyya after Israeli forces devastated the area. 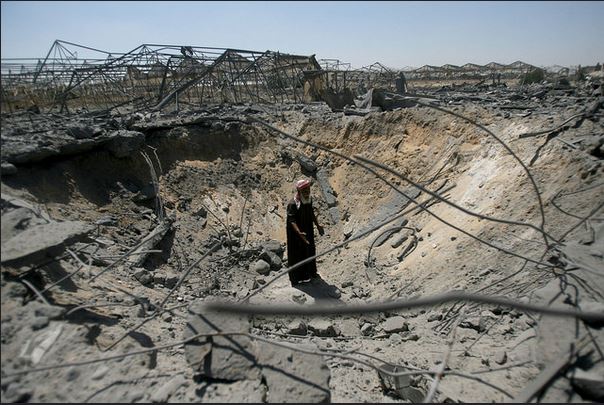 Photo: Mohammed al Baba/Oxfam – destroyed greenhouse in Gaza, July 2014
My name is Ahmad. I’m 25, and I’m from Shuja’iyya.
The war lasted for too long, far beyond our expectations. It forced upon us a level of pain that exceeded what we had expected in our hearts and souls.
Over two years have passed since this evil war that devoured everything in Gaza. The only thing it left in the sky was the smoke and the still-present planes.
On the land it left only the rubble of demolished houses that had for years hosted love and memories. Houses were shelled, brought down onto the heads of their residents, claiming some of them to heaven as they collapsed, turning the page on a family life that was once filled with love.
The war did not spare any of the birds that sang in the mornings to our people on their windows.
The war robbed the beauty of the sea of Gaza. The sea is the shining face of Gaza. It harboured the concerns of the people of Gaza throughout the long years of siege and killing. It shared with them the burden of three wars and two or more intifadas.
The sea that consoled the people living under the strain of their grief; the sea that opened wide arms to embrace them in comfort and love!
Even the sea was robbed by murdering boats that shelled arbitrarily on that beach.
This is Gaza, the Gaza that no words can describe, the Gaza that no language, even Arabic, can provide a simple description for, since only with the flooding of blood does the world locate Gaza on the map.
It is a story of dedicated patience. This is the Gaza adored by its people who cannot hate it no matter what it does to them. It stole their right to life; it robbed any sense of comfort, happiness and beauty. 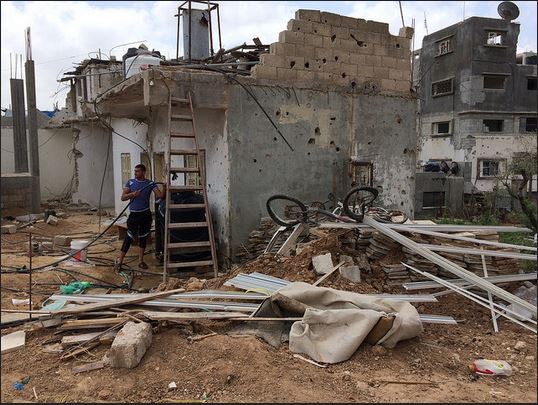 Photo: EU/ECHO/Caroline Gluck – destroyed water reservoir in Shuja’iyya, May 2015
Still, its people love it because Gaza is different from any place in this world. To them, Gaza is something else that words fail to describe!
But we are incapable of optimism. We are incapable of bearing any pain or prolonging our patience after all this time.
We cannot understand the tears in the eyes of a small child whose parents were killed, leaving him alone in a maze that will haunt him forever.
I wonder how we can understand the feeling of a person who lost his brother, with whom he shared an entire life. They played together; he was with him in everything he did.
I wonder how we can understand the agony of a mother who lost her little child she used to play with every morning. She used to put perfume on the baby and dress him elegantly. Is he now more elegant in the coffin? Will he be happier in paradise away from the injustice and darkness of Gaza?
I wonder what would be the feeling of a little boy when he heard that his father was killed. I thought about this a lot two years ago when my father’s cousin was killed, along with his family, leaving his little son alone.
I tried to imagine what the life of this boy would be like, without a father who would support him in his coming days. Then, I saw the boy working near the university.
At that moment, I had another feeling I didn’t immediately recognize. I was amazed by his patience and perseverance to continue striving after the death of his father.
I wonder often how can an entire family that lost its house when it was destroyed with all of its contents simply continue to live. I wonder how this family feels.
How does the house owner feel, the head of this family who spent years of hard work to build all this? He worked very hard to provide safe shelter to his children and family.
Inquiries continue about how those who lost their family and friends cope, those who lost their houses and homes, those who lost a beloved one, a friend and brother.
The tough truth is that we will not know how any of these people feel; they are the only ones to know this feeling. No matter how much we speak or try, we will not be able to know their mindset unless we go through the same experience.
Well, now that the war is “over”… none of these things have come to an end. Deep wounds remain open. Rockets, snipers, planes, war boats, and artillery made these wounds, yet concealed them with their smoke and rockets.
Nobody could feel the extent or weight of pain back then.
But, now that all this has gone, and that we remain here, we will unveil our wounds left by the war. We will unveil our hearts in which the war had carved a deep hole with pain and grief. Pain for the loss of a relative or a beloved one, for the loss of a house or a dear place. We will open our wounds and work to heal them.
We know that everything the war had robbed cannot be redeemed or compensated by anything else in this world. Nothing can compensate a man for the loss of his child he had raised for years.
Nothing can compensate a man who labored for decades to build a home for his little children. Nothing can treat our aching hearts.
All I wish for is that God who tested us with this disaster shall have some mercy on us, on our burdened hearts. I wish he shall have mercy for the laughter of the children of Gaza and the strength of its men and the grief of its mothers.
This is the commemoration of the war on Gaza. Notwithstanding the death, destruction and pain that melted our hearts and destroyed our beautiful moments, I still remember Gaza’s voice calling me in anxiety and horror.
I was in extreme distress after what we had witnessed. I was about to retreat in the shadows of horror and fear. But, Gaza, she empowered me with means to resist and pushed me to write and write.
I could not find electricity or the  time to write.
We would hurry to count the missiles shot by the Israeli planes and as the night came to an end, our eyes would be strained as they focused on counting and we clung to the walls. We tried to find the safest corner in our home.
We were like children; we realized that death was very close. But what could we do other than raising our arms to pray to the sky!
Gaza’s voice called me to encourage me to write about you and about them.
‘Don’t carry on like this while you can tell the world what happened here, those who are not aware of the massacres committed here; we want the world to hear your voice and their voice.’
I would hang up the phone and start looking for white paper and a pencil to record what I saw and heard.
I went to see the schools where hundreds of women and children found shelter after they were made homeless, now dependent on aid. They were terrified, shaking with fear and cold. Death was so close to them. 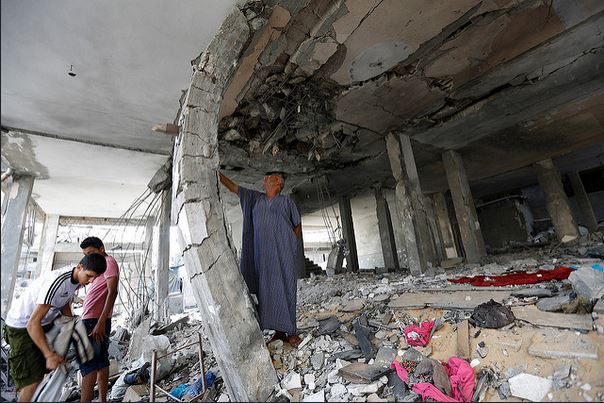 Photo: Mohammed al Baba/Oxfam – destroyed building in Gaza, July 2014
We were running before the assault and we were still running during the attack. We are not certain that we will ever stop running.
How could we redeem the beauty of life after it had taken the bodies of children? A man carried the body of his child and did not need a coffin; his arms were the coffin of his child, shrouded with a white cloth.
He walked with his head up and his tears pouring. Still, he was lucky to be alive to bid farewell to his child. Other families were entirely buried in their homes and nobody remained to hold a funeral ceremony for them.
In this civilized world of international human rights conventions, the right to life, the right to housing, the right to education, the right to free expression and many other rights – there are no rights for Palestinians. These are the rights of others.
Who cares about the women running in their prayer clothes, the only thing they found to cover their bodies, fleeing, when hate surprises them with an explosive missile?
Their dreams are shattered, leaving them vulnerable to suffering, oppression and pain. She carries a child, she carries a bleeding heart, she carries sorrow. She leaves behind an elderly person; she forgets her heart in a corner of her home.
She is afraid to look back to the scene of her beloved ones covered in blood. She runs and runs to infinity, for if she stops, she will never be able to run again.
No room for life. No place for return. All of Gaza is bidding farewell to each other every night, congratulating those who survived for another day.
They close their eyes, re-open them and call out the names of their family members, one by one, so that their names do not vanish from memory and their souls do not fade way.
Palestine will remain alive in the hearts of those who departed and those who remained alive.
There are no words to describe this war. This is the war that robbed everything we had. It left us with mere painful memories we are forced to re-live every day and every moment.
The war that sabotaged our future and the future of our young people. Many graduates wander here and there without any future. I, writer of these lines, am one of them. I graduated from law school, which taught me that rights are inalienable.
I pursued further studies and earned an MA in public law. However, now I am waiting for a sign of some hope to be someone in this society. I work in a specialized human rights organization to monitor war crimes and the ongoing suffering caused.
But, here in this land, hope for any simple thing is an impossibility.
The views expressed in this article are those of the author. 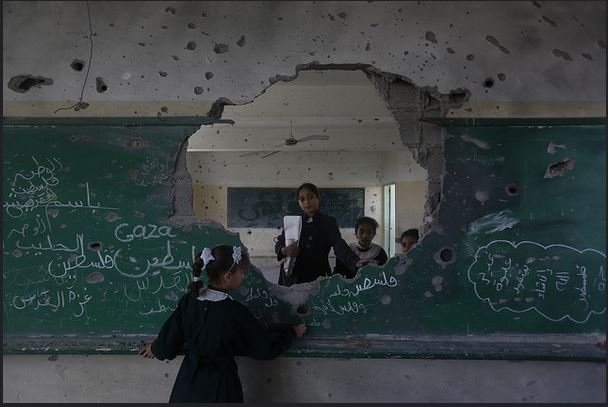