Violence without justice: Mexico’s War and its consequences 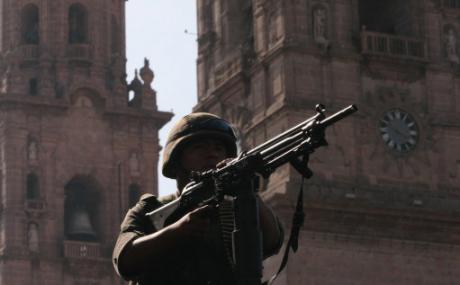 Mexico’s
War is a civil war against and amongst citizens,
regardless of where they stand on the drug business, of devastating
consequences for the population and the state.

Mexico’s so-called war on
drugs has not ended. While no longer part of the government’s official
discourse, the logic of war continues to pervade the state’s militarized strategies
against criminal organizations. Most importantly, this war continues to be felt
amongst individuals, families, and local communities that endure its
consequences in the form of extortions, kidnappings, disappearances, torture, and
forced displacements. More than “collateral effects,” these various forms of
violence and its victims are at the center of Mexico’s ongoing war.

To the extent that it has
fundamentally impacted the life and wellbeing of thousands of citizens, this
war cannot longer be understood- if it ever was- as one waged by the state
against criminal organizations. The number of massacres committed by criminal
organizations with the complicity or neglect of state actors against unarmed
civilians –including immigrants- speaks to a reality with roots and
ramifications that we are only beginning to understand.  Violence’s geographical reach and its levels
of brutality confirm Mexico is enduring a war, albeit of a different kind. Scholars
like Andreas Schedler have suggested the term “economic civil war”; others have
proposed “narcoviolencia” or “non-conventional war”. A civil war, I would say,
against and amongst citizens, no matter where they stand on the “drug
business.”

At the beginning of his
term, president Enrique Peña Nieto promised to move away from the previous
government’s security strategy. Focused on militarized operations, massive
incarcerations, and the neutralization of DTO’s main leaders, this strategy was
-then and now- seen as limited in its scope and detrimental in its
consequences. Not only did this strategy failed to decrease levels of violence,
but it also lead to the formation of more fragmented, dispersed, and predatory
criminal organizations.

Despite of this, Peña Nieto’s first impulse to revisit
and transform the country’s security policies was quickly abandoned. The
possibility of adopting more integral and people-centered approaches was
replaced by a series of disparate initiatives aimed at providing immediate answers
to what are clearly deep-seated institutional and structural challenges.

Mexico’s current disjointed
security strategy has thus reproduced past mistakes but has also resulted in newer
and deeper signs of democratic erosion. In particular, civil society and
international organizations have documented human rights violations and crimes
against humanity that have occurred with the negligence and criminal collusion
of state actors at different levels of government.  In addition to the Group of
Independent Experts (GIEI), the Inter-American Human Rights Court, the UN Human
Rights Council, Amnesty International, Human Rights Watch, and more recently,
the Open Society Justice Initiative, have consistently documented cases of
torture, abuse, and violence which presence is systemic and widespread, rather
than isolated.

These
and many more organizations working closely with victims and their families have
turned to the government in search for answers. Mexican authorities’ response has
oscillated between cautious openness and overt defensiveness, with the latter
position becoming prevalent during the last months. This shifting position is
expressed in the government’s first open and even welcoming response towards
the GIEI and its subsequent defensive and dismissive attitude. Needles to say,
this kind of incoherent response goes against the level of democratic maturity
that Mexican society has reached.

It hurts Mexico’s position as a global actor
that has, over the past twenty years, embraced and promoted a human rights
agenda at the international level. More so, Mexico’s reactions have severely
curtailed the process to elucidate the truth and attain justice, to the
detriment of thousands of citizens and of the government’s own legitimacy.

No
doubt, the Mexican government faces a difficult task. Acknowledging the
findings of
civil society actors and international organizations would push authorities to
recognize that the country’s current levels of violence and abuse reflect more
than a few isolated cases.

In other words, it would drive the government to abandon
the “few bad apples” narrative and acknowledge that there is systematic neglect
and state involvement at the local, but also at the state and federal levels.
It would also push authorities to recognize that there are spaces that have
fallen under the control of criminal organizations, with the acquaintance and
complicity of state actors- including mayors, governors, police, and military
personnel.

The fear of being
labeled a “failed state” runs deep amongst Mexico’s political elites, as does
the idea of loosing sovereignty in the face of international actors and organizations
that may decide to intervene on matters considered of “national interest.” Surely
the label “failed state” has proven to be an inadequate and often politically
motivated tool that does little to help rebuild countries’ institutional and
structural capacities. But the international community’s call for transparency,
accountability, and adequate responses, cannot be ignored.

The notion of
sovereignty as a matter of protecting national and state interests, paradigmatic
of Mexico’s post-revolutionary state, no longer holds. To the extent that it
can fulfill its mandate to protect citizens from harm and provide
them with effective avenues for justice, a country remains sovereign. Nationalistic
pride won’t do; Mexico’s responsibility to protect is indisputable and
unyielding.

Mexican authorities
would do well in addressing the challenges and recommendations that have been
made by international organizations, in conjunction with civil society,
investigative journalists, as well as victims and their families. It would be a
sign of strength and democratic maturity and it would potentially open up a
process of rebuilding Mexico’s security and justice systems. Rather than
dismissing or silently ignoring the calls for justice from different national
and international actors, Mexican government should take advantage of these
diagnoses and ask the international community to suggest context-specific and feasible
recommendations that can be put into practice in the next months.

Some promising
recommendations have already been made. These include the creation of an
investigative and independent body similar to the International
Commission against Impunity in Guatemala.  Once again, taking these suggestions seriously
implies overcoming defensive and nationalistic attitudes. It entails looking at
Guatemala and the countries of the northern triangle as nations that can offer
important evidence of former failures and successes.

The
roots of current levels of violence in Mexico are in the past as well as in the
present. They have to do with a longstanding partial and politicized
application of the law that allowed political elites to claim control over
communities and territories through extra-legal means.
They are also connected
to the recent escalation of drug-related violence and a failed security strategy
that has corroded both state institutions and local communities.
The war
will not just wither away. Unless serious and systematic measures are taken to
reverse the damage done by reactive and militarized strategies, the consequences
of this war will continue to be felt in a deeper and more pervasive manner.