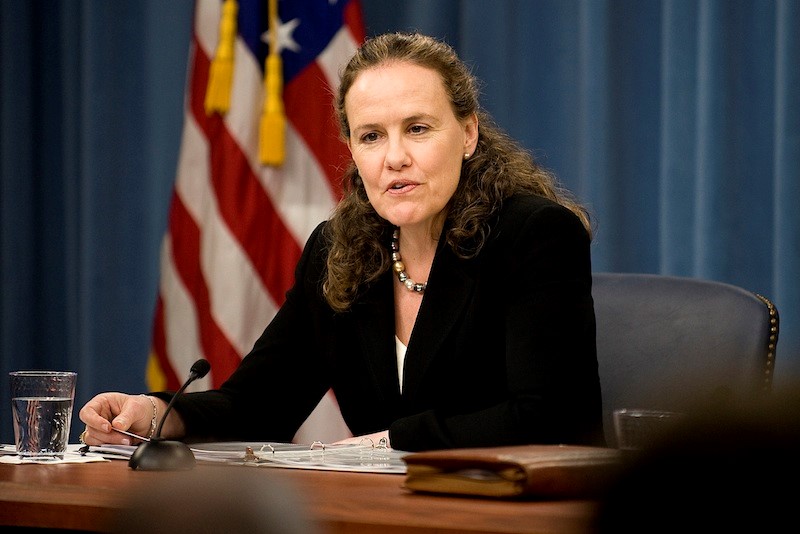 Michele Flournoy, 2010. (Defense Department photo by
Cherie Cullen/Released)
By Philip Weiss,
MondoWeiss, May 31, 2016
The Center for a New American Security is a
Washington thinktank started by Clintonite liberal interventions (who
work very well
with neoconservatives). It has just released a new report aimed
at reviving the two-state solution by addressing the security needs of Israelis
and Palestinians.
The chief author is Ilan Goldenberg, a former Kerry
staffer. But of the three other authors, two are Israelis: Nimrod Novik, a
veteran Israeli
ambassador and political adviser on the Labor side, and Gadi
Shamni, a former Israeli military commander.
There are no Palestinian authors. Imagine that: an American thinktank report aimed at
resolving the conflict is authored by two Israelis, without any Palestinian
authors. (This imbalance is why Palestinians don’t really trust American
intervention, because of the role of the Israel lobby in our politics.)
Not surprisingly, the main problem with the report
is that it is aimed almost entirely at Israeli security needs, which as Yakov
Hirsch says, below, are psychological needs that cannot be addressed by
material conditions.
The report describes heavy security arrangements to
address “core Israeli security requirements” but not much in terms of
protections for Palestinians from Israeli incursions into their supposed
sovereignty. Israelis are always the overlords. Thus in the Gaza fishing
question, Gazans have their 12 mile nautical zone, but it’s enveloped by an
Israeli Navy patrol.
There are two other glaring problems I noticed in a
quick look-over:
1. The Israel lobby is alive and well: the United
States would have to stand by Israel whenever it needed to invade the sovereign
but demilitarized Palestinian state (and commit human rights abuses):
the United States and Israel would have a side
agreement stating that if Israel were under direct and imminent threat, the
United States would support Israel diplomatically if it chose to take action…
Palestinians wouldn’t like that, but tough:
the first time Israel takes such action, it could
cause a major crisis in the agreement, especially if there are no mechanisms to
mediate such a crisis. An option to address this dilemma is a a side agreement
on the general conditions under which the United States would diplomatically
support Israeli action inside the future Palestinian state.
2. The report is obsessive about Palestinian
“biometrics.” The word is used 13 times, and it’s creepy. The
governments would collect biometric data on all Palestinians and that is a
key way that Israeli security would be enforced. The Israeli government would
hold all this Palestinian biometric data. There’s no reference to Israeli
biometric data, and who would hold that.
Here is the description of the creation of
Palestinian passports, for instance:
F. Creation of Passport and Visa Regime
i. Creation of personnel database
ii. Installation of biometric data collection equipment
iii. Training of personnel on biometric data collection
equipment
iv. Collection of biometric and personal data…
Even in traveling from the West Bank to Gaza on a
new specially secured “corridor,” Palestinians would have to undergo
“biometric” scrutiny before leaving and entering Palestinian space.
This description reads like Big Brother:
There are numerous passport, permit, or visa
regimes that can be set up, butthe key is that any process would ensure that
there is biometric data to confirm the identity of anyone passing through
the crossings and that all parties maintain real-time visibility of all
crossing data. The [Palestinian, Jordanian and Israeli security forces] would
use a shared, state-of-the-art traveler database that would include relevant
watch lists, shared data on travelers, biometric data for positive
identification, and other relevant information. The passport, visa, or permit
application process, which would include biometric data collection, would add
another level of confidence to personnel identification so that all sides would
be satisfied they knew who was leaving and entering via these crossings.
Just in case you found that disturbing, a footnote
says Palestinians are already under that kind of control:
Palestinians working in Jordan but living in the
West Bank, Palestinians with a Palestinian ID card, Palestinians living in
Gaza, and Palestinians with Jerusalem IDs. But they all share a common trait of
requiring some kind of permit/ identification to cross the border. And thus
whatever system is set up would be no more onerous than the current system but
would require everyone to give biometric data when obtaining their crossing
documents
What do Palestinians get out of this? Well the
report recommends that Israel “eliminate the everyday feeling of occupation as
quickly as possible, primarily by reducing the visible presence of the IDF and
reducing barriers to movement and access around the West Bank.” I.e., a more cosmetic
occupation.
Michele Flournoy, the likely Defense Secretary
under Clinton, just introduced the report in a Washington panel on CSPAN, with
similar vague expression of concern re “Palestinian plight.”
Yakov Hirsch interprets
the word “security” in the Israeli context:
The word ‘security’ doesn’t mean what everyone
thinks it means. No country can ever have absolute ‘security.’ And
‘security’ is unachievable if you think the other side of the conflict is
motivated by anti-semitism and the desire to kill Jews, as Israelis do. But it is not at all insurmountable  to
have ‘security’ if you think Palestinians are normal people.