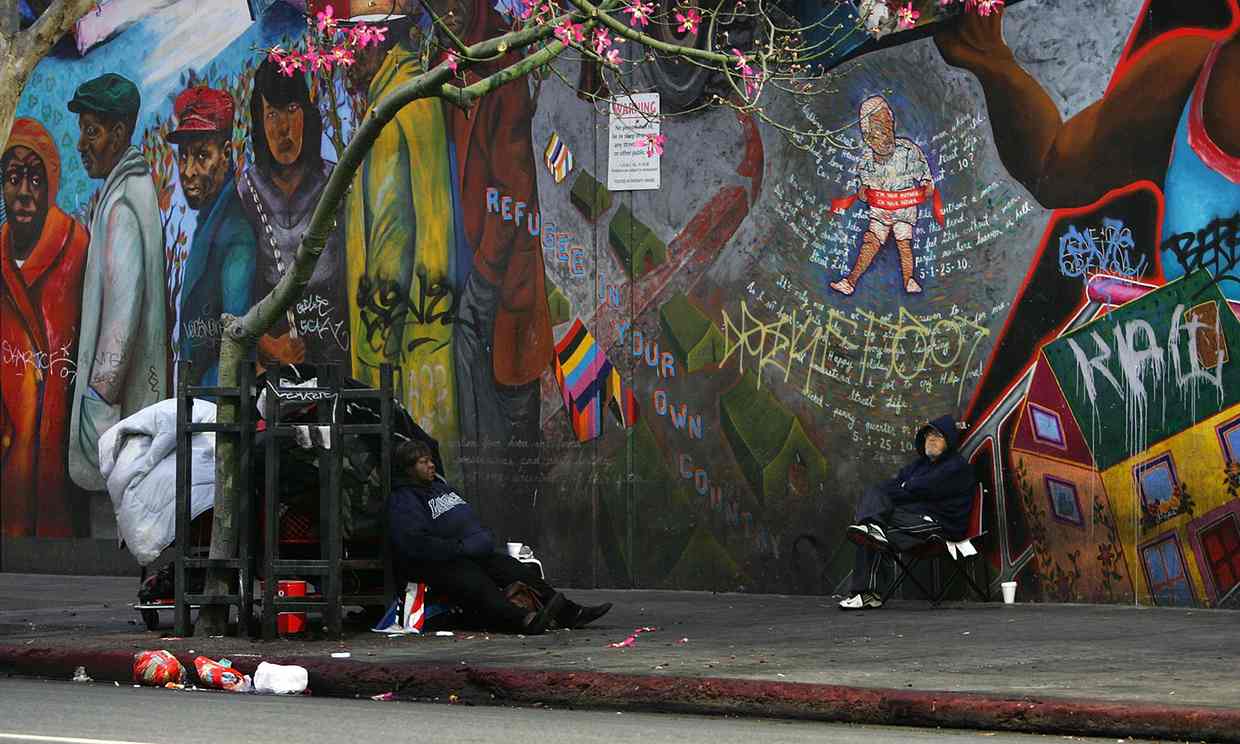 From a crazy golf course in LA’s
Skid Row funded by Mike Kelley’s estate, to New Yorkers asking Who
Stole the House?, artists are addressing the cost of property.


The residents of Los Angeles’s Skid
Row have faced many perils. Yet they haven’t, up until now, had to
contend with golf-related injuries. This may change in a little over
six months’ time, when a new nine-hole course is scheduled to open
in this Los
Angeles neighbourhood, home to as many as 6,000 of America’s
homeless.

These urban fairways are not the work
of some misguided sports-facility developer, but a collaboration
between local artist Rosten Woo
and the Los Angeles Poverty
Department (LAPD), a performance art and activist group based in
the area. Woo intends to create The Back 9, a playable course of nine
holes inside LAPD’s Skid
Row History Museum and Archive, as a way of addressing Skid Row’s
current and historic zoning issues.

“The city is trying to redesign its
entire zoning code,” says the 37-year-old artist, “and there’s
a desire among a good number of people with power to have Skid Row
rezoned.”


While Woo hasn’t settled on any
clear designs for his course obstacles, he hopes his project, which
recently received $50,000 from the Mike
Kelley Foundation, will help Angelenos understand the way LA
organises itself.

And what a crooked history it is. Some
believe the preservation of Skid Row, a 50-block district in downtown
LA which has over the past half century offered low-cost
single-occupancy dwellings, not only stymies local development, but
also traps its residents in poverty. Others, such as Woo, argue the
area actually serves as a kind of safety net.

“Skid Row is a recovery community,”
he says. “It provides mustering of social services, when you are
lost in need of some assistance; it’s a place where you can go to
get back on your feet.”

Whether you agree with Woo or not,
it’s hard to deny his place alongside a number of contemporary
artists seeking to address real-estate issues through their art.


New Yorkers Jennifer Dalton and
William Powhida are currently in the closing stages of their
Month2Month project, a
series of public art events held in private residences across New
York City, about how class, wealth and social mobility affect
people’s ability to prosper in the city.


The pair have worked together in the
past and produce paintings, drawings, photographs, installations and
other works individually too. However, since 7 May they have hosted a
wide range of social gatherings, including a champagne reception
featuring an address by the economics journalist Felix
Salmon on the New York housing market; a night of communal real
estate confessions, entitled Gentrifiers
Anonymous; a murder mystery game called Who Stole The House?; and
a remarkably modest gala dinner for developers and real estate
professionals, held in Powhida’s own two-bedroom Brooklyn railroad
apartment.

Month2Month is a response to the way
contemporary artists are sometimes employed, unwittingly, as tools of
the real estate industry. “There’s often an attempt to do art
projects in areas that are being prepared for the next level of
gentrification,” says Dalton.

Powhida and Dalton acknowledge that
their series of open-access discussions is part of an ongoing
tendency in contemporary art, sometimes described as “social
practice” or “relational aesthetics”, wherein artists present
novel social relationships as art. “I think the idea that
relationships between people can be art is really becoming more
acceptable,” says Powhida. 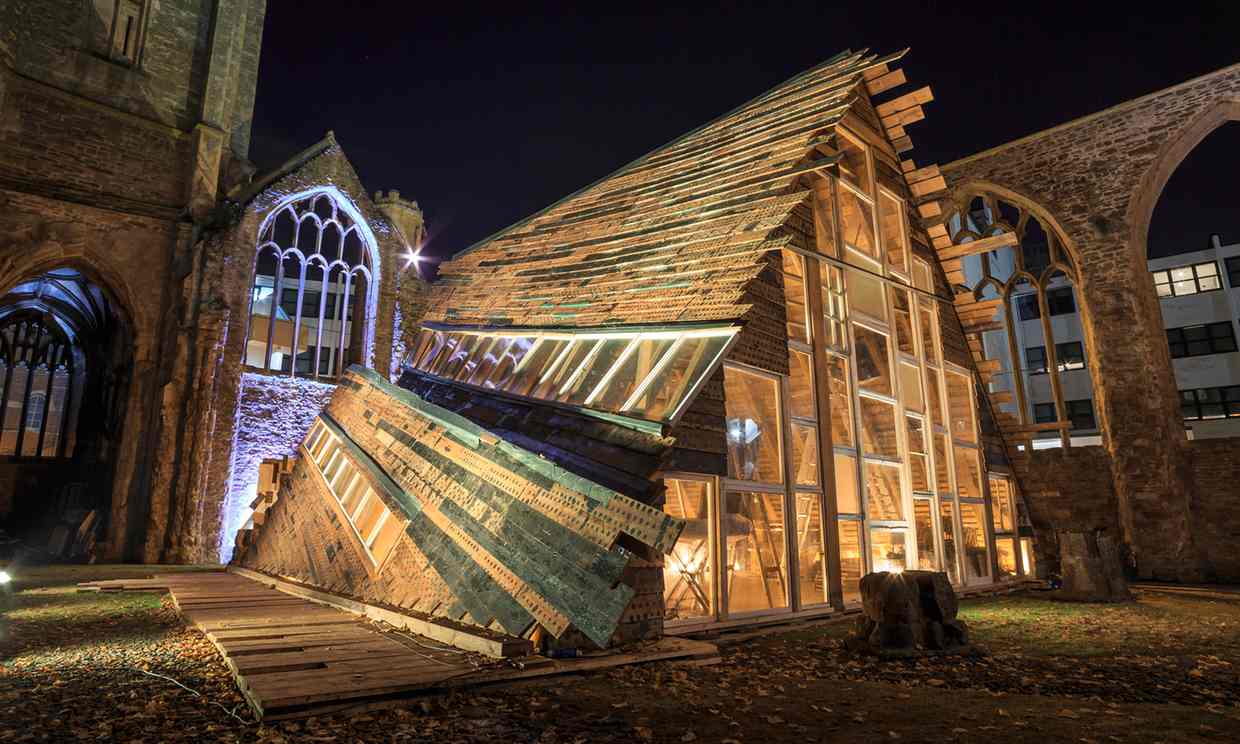 The duo are also alive to the work of
other artists, such as Theaster
Gates in Chicago and Rick
Lowe in Houston, both of whom have sympathetically redeveloped
rundown housing in their respective cities as part of their artistic
practice.

However, these New
York artists also understand the ways in which an open-minded
discussion of local real estate gossip can lead on to larger topics.

“It is a way in for talking about
larger inequality issues,” says Powhida, “housing becomes a lens
of segregation in this country.”

“At one of our talks someone said if
we don’t resolve the legacy of racial discrimination we’re not
going to be able to house everyone adequately,” Dalton says. “It
went pretty deep.”

Perhaps, in an age when protest
marches and protest songs may not be as effective as they once were,
artists such as Woo, Powhida and Dalton are finding new ways to
approach social problems.

“I don’t think we’re reinventing
any great model, but we’re not standing on a corner and shouting
about something,” says Powhida. “Contemporary art is about
ambiguity and open-endedness. If you present a talk as art, people
might be a bit more willing to listen.”

Just where that conversation will go
is unclear. Artists like Woo, Dalton and Powhida might be turning to
housing because, in a nation where, despite growing inequalities, it
is still moderately unacceptable to discuss wealth redistribution,
real estate is an easy way to get less palatable and less tangible
subjects on the table.

“You don’t see the people making
your shirt or picking your food,” says Woo, “but you can see
inequality really clearly when your neighbours change, or you
yourself having to leave your apartment. It’s not the worst aspect
of our particular moment in capitalism, but it is the most visible.
People want to talk about it, but it’s not where I think the
conversation should end. I think it does suggest it’s a way into a
much larger phenomenon.”

We will have to wait and see if LA’s
more open-minded golfers agree.