by Milena Rampoldi, ProMosaik e.V.
A wonderful interview about a matter which is brand-new

for ProMosaik e.V. It concerns Japanese calligraphy. We would like to thank the calligrapher Chikako Fukami-Thomsen for her time, and her excellent explanations of this so great art. To see more, visit Chikako’s website: http://www.japanese-calligraphy.net/ – Calligraphy, the key to express Japanese culture, thoughts put into ink.

Milena Rampoldi: How did you find your way to Japanese
calligraphy?
Chikako Fukami-Thomsen: It
was my mother’s dream that I should excel in calligraphy.  Since we have had generations of calligraphy
masters in my family, she decided that I must also follow in this
tradition.  So, as soon as I started to recognize
words, I was sent to a local calligraphy teacher on a regular basis.  At the age of five, I could already wield the
brush.  And when I entered elementary school,
she made me a student under a well-known calligrapher, Fukada Hōsen, a member
of the close circle of disciples around Hibino Gohō (1901 – 1975) and, by the
way, the only female disciple of Gohō.
Hibino Gohō is one of the most important Japanese calligraphers of this
century, and he actively promoted the use and research of Japanese-style
classical kana calligraphy. My apprenticeship under Fukada sensei changed my
life and I have been learning from her for over forty years. MR: What is the importance of calligraphy
in Japanese art, philosophy, and culture?
CFT: Calligraphy
is central to Japanese art.  For a long
time in Japan’s history, calligraphy was seen as the most important art form.
This was also the same in China: the importance of calligraphy in East
Asia is hard to overstate.  As a
consequence, all the elements of brushing ink became important: the shades of black
of the ink, the basic brush skills, the various special techniques, the leading
masters and their works, and an appreciation for calligraphy that can only be
felt “through the skin.”  All these
became a part of the aesthetics of calligraphy.
Calligraphy
also became central to Japanese philosophy, especially as expressed through its
religious leaders, such as those in Zen Buddhism.  There is a long tradition of expressing
profound thoughts in ink.  This tradition
came originally, together with Buddhism and Buddhist philosophy, from China. Again, it was though that inner personalities
were expressed through calligraphy, and so the writings of leading religious
figures were revered and treasured in various collections.
As a
part of Japanese culture, calligraphy has always been there as a key form of
cultural expression.  It was something
that always had been there as a part of regular expressions and thus inseparable
from Japanese culture.  With the advent
of the computer, however, writing by hand and brush is now becoming a special
skill – but until then it was part of daily life, part of education in schools,
and part of the expressions of any educated person.

MR: What are the relationships between
calligraphy, poetry, and religion? 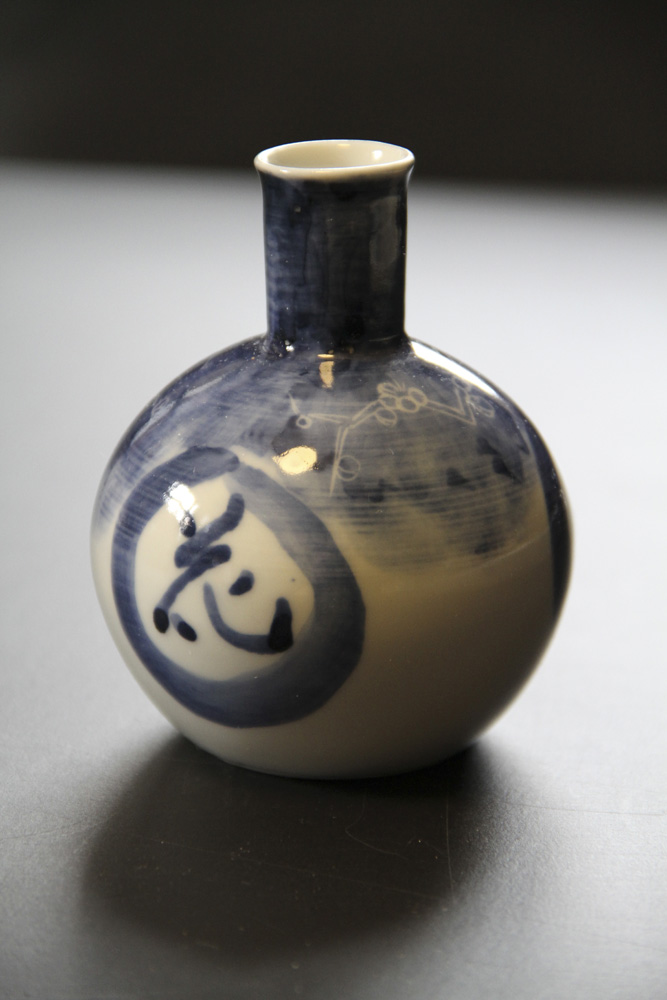 CFT: These
relationships can perhaps be best expressed through the calligraphic arts of
the Heian period (794-1185).  During this
period, calligraphy was developed from Chinese forms and the Japanese
traditions can be seen in texts of the period, for example, The Tales of Genji.  Here we see its use in poetry on special
occasions, as ways for expressing inner emotions.
This
was connected to practice later on, for example, during the Edo period
(1615-1868), where monks and nuns such as Rengetsu, Ryōkan, Hakuin, and others
expressed both poetry and religious thoughts through calligraphy.   Here we see the development of calligraphy from
the high and exclusive society of the Heian period to the poet-monks of the Edo
period, and to people who tried to spread calligraphic expressions to wider audiences,
by tying it together with religious thoughts.

MR: What are the importance of empty
spaces in the Japanese world vision?
CFT: Empty
spaces are very important!  In Japan, one
communicates through emptiness and silence – and this is especially so in
calligraphy. The empty spaces are just as important as the written spaces – one
cannot ignore the presence of nothingness.
The ability to create and control empty spaces comes only at the end of
a very long practice, after years of effort.
Empty spaces in calligraphy are also related to the culture of silence:
speaking and silence – both are just as important in expressing of inner
feelings and thoughts.

MR: What are the most important things that
one can learn by practicing calligraphy?

CFT: Holding
the brush and practicing is basic to learning calligraphy.  One cannot learn through sitting back in a
chair and thinking.  And learning from
the masters of the past – from the classic period, which in Japan was the Heian
period and China in the Tang period (618-907) – is vital to developing skills
and forms of expression.  As for deciding
the most important masters and periods, this depends of course on individual
preferences, but I prefer the Tang period.
The
most important lesson of calligraphy is learning inner truths.  It is not only about forming shapes, but a
searching for inner directions – and, again, this ability only comes from a
long period of practice.  Through your
search you eventually find your own forms of expression: paradoxically, copying
the masters will eventually lead to self-expression.

MR: Can you explain us in a couple of
sentences what Zen poetry means to you, and how it can be expressed in
calligraphic art?
CFT: I see Zen poetry in terms of images,
nature, and emotion.  When I see images
conjured from the poetry, then I try to think of a way to turn them into
calligraphy.  The decisions I take
include the choice of paper, the forms of the characters, the shapes of spaces
and lines.  I try to make the poem live within
the calligraphy.  In Zen poetry – such as
that of Ryōkan – we see the details of nature: the seasons, the flowers, and even
the colors of the grass: these images also urge expressions in words.  Finally, turning poetry into calligraphy also
includes paying attention to the feelings expressed within the poems: feelings
of longings, of happiness, of sadness – all these also need to be formed into strokes
of the brush.  I see Zen poetry in terms
of weaving a complex fabric: the wefts are the feelings, and the warps are the scenes
of nature.  Combined they create the Zen
poetry as expressed through calligraphy.