The Guardian, 11 December 2015. Trump Towers Istanbul reviewing ties with Republican presidential frontrunner after call to ban Muslims from entering the US. 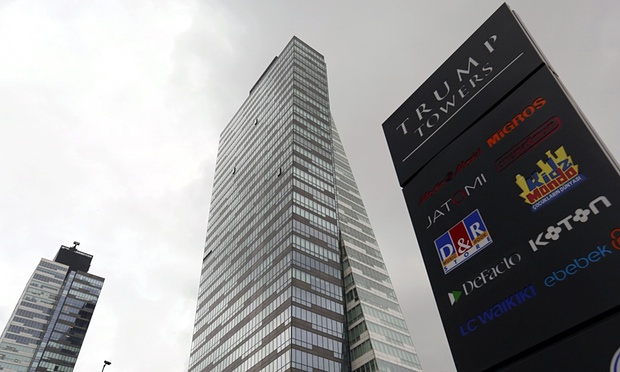 The Turkish franchise of Trump Towers has condemned Republican
presidential frontrunner Donald Trump’s proposal to temporarily bar
Muslims from entering the US, saying it was evaluating its legal ties
with the brand name.

Trump Towers Istanbul is a commercial and residential complex
developed by Turkish billionaire Aydin Doğan that soars over the city’s
central business district. Doğan pays Trump for the brand name.


“We regret and condemn Trump’s discriminatory remarks. Such
statements bear no value and are products of a mind that does not
understand Islam, a peace religion, at all,” said Bülent Kural, the
manager of Trump shopping mall.

Trump, a real estate mogul and former reality TV star who leads
opinion polls in the Republican nominating race for the November 2016
election, has come under heavy criticism at home and abroad over his plan.

He provoked international uproar by calling for Muslims, including
immigrants, students and tourists, to be blocked from entering the
country after last week’s shootings in California by two Muslims, who
authorities said were radicalised.

“Our reaction has been directly expressed to the Trump family. We are
reviewing the legal dimension of our relation with Trump brand,” Kural
said.