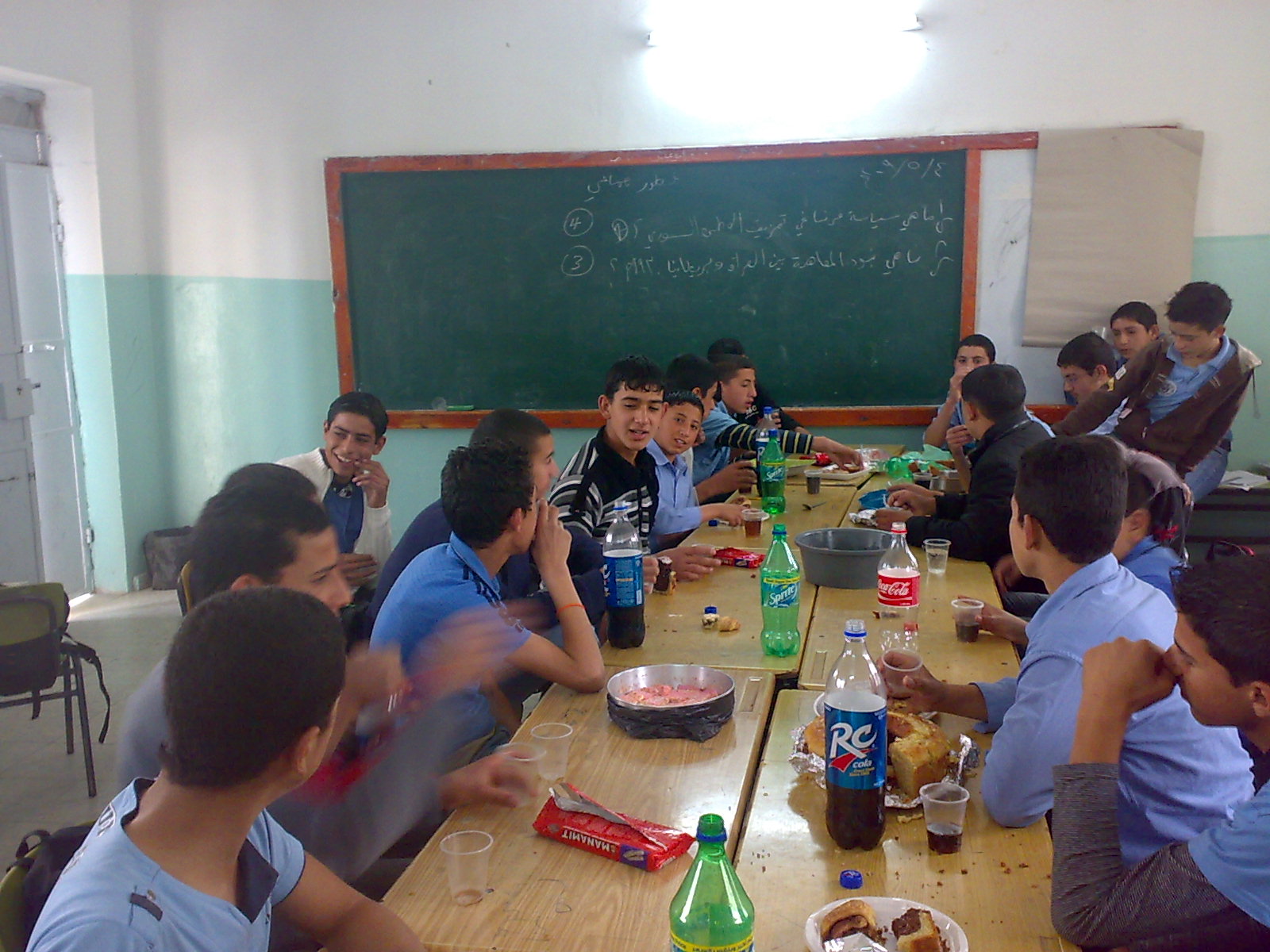 by Issam Sahori, Bethlehem. This is the second part of our series of articles about the school projects Issam Sahori, a teacher in a village next to Bethlehem is involved. He has been a teacher for 15 years in the occupied Westbank now, and about his students he wrote us: “My project is about how to protect students and children from violence and trauma in the village where I teach. I have been a teacher for 15 years now, under the Israeli occupation. The occupation killed four
of my students.
More than 50 of my students had their experience in an Israeli prison. More than 70 of my students were wounded. Tens of my studens have a psychological trauma because of the Israeli occupation and the daily violence.”  In the following the project presentation by Issam Sahori to understand how the situation is there, and what are the needs of these children and young people who have not lived one day of peace in their lives. 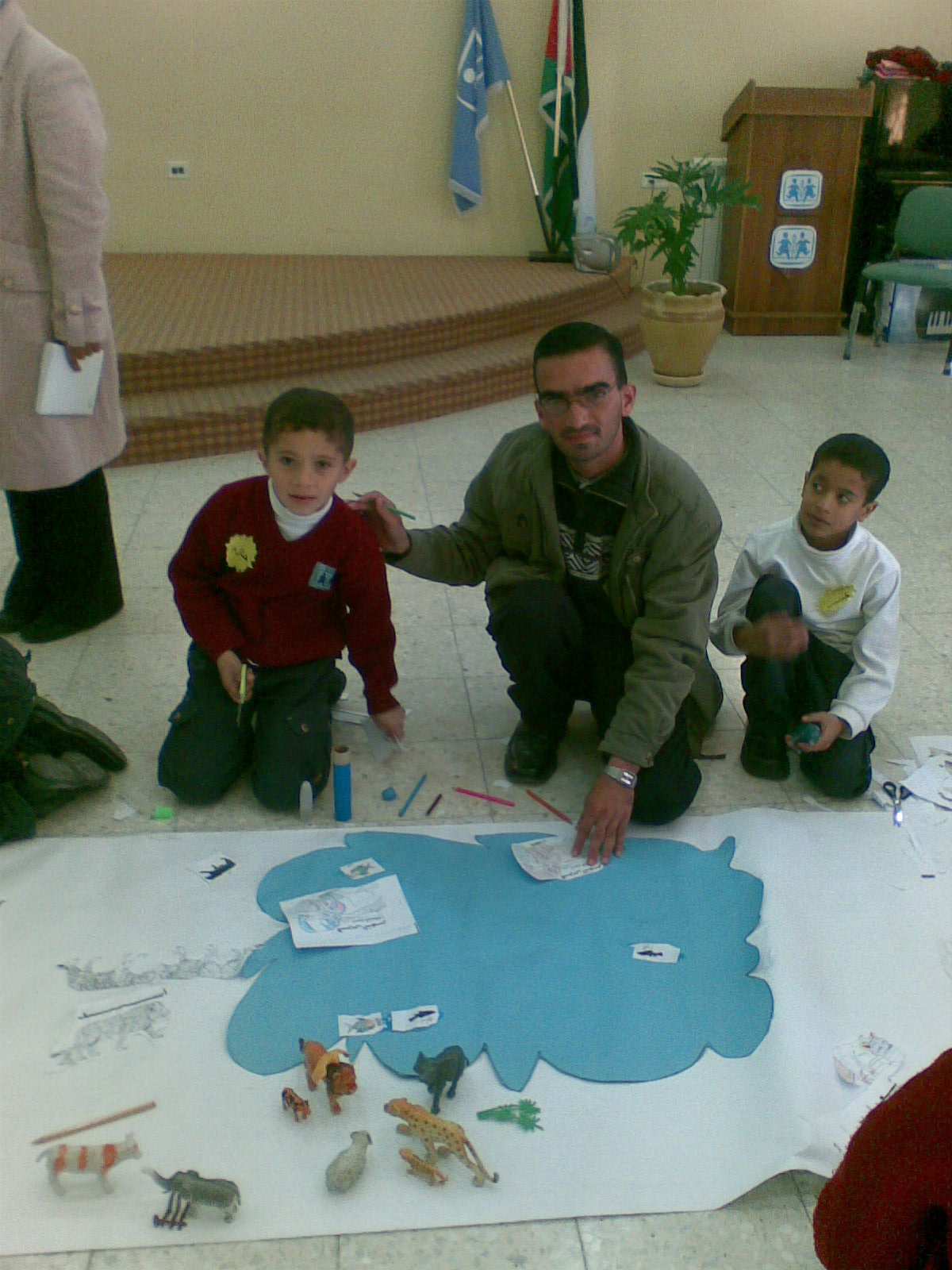 The Idea for this Project
The
idea for this Project originated after a visit of us as teachers from the Teqoa
Secondary School near Bethlehem (Palestinian Territories) of a weeklong
workshop organised by the Youth Theatre Moabit in Berlin. We got a one-month
scholarship at the Georg Eckert Institute for Schoolbook Research in
Braunschweig to develop a written documentation of an art project against
violence in their schools responding to violent conflicts between school
students, Israeli settlers from a nearby settlement and the Israeli armed
forces.
Introduction
What
became obvious was that Palestinian teachers need all the support that they can
get.
our school is overcrowded,  700 pupils have to fit into a space meant for
a maximum of 400. Many classes have over 40 children crammed into a small
space, with bad or next to no lighting and ventilation. There is no central
heating, paraffin and gas heaters being used in winter. There is no real
meaningful recreational space. Many facilities are still damaged from years of
conflict.
Direct from the school yard one can see the Jewish
Settlements on the hills. The Road that leads to the school from the village is
also used by students from another mixed school and Jewish settlers driving to
their settlements. This, as in many other areas, has been the main source of
conflict between Palestinians and the Israelis on the West Bank in recent times. 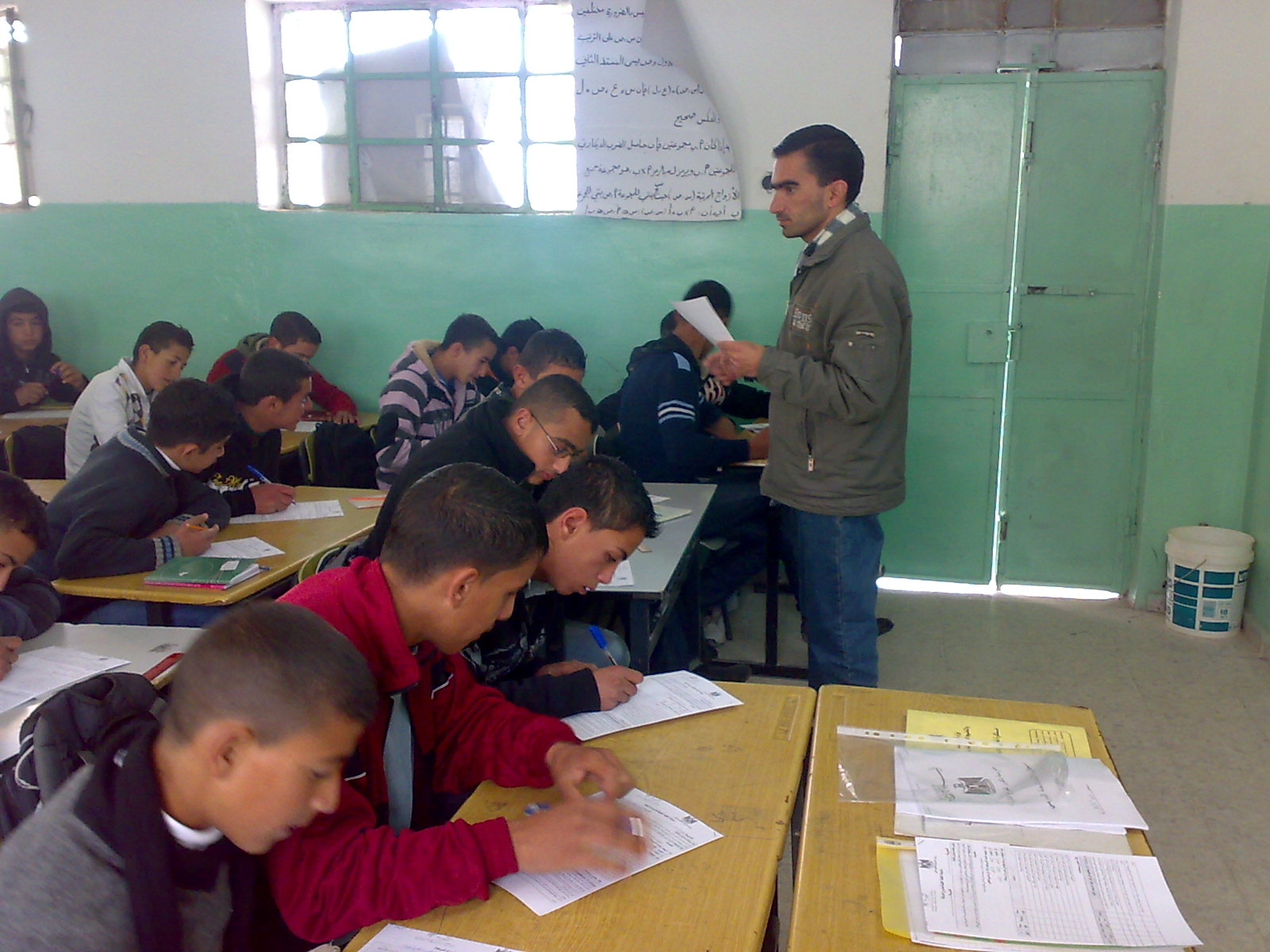 An Israeli tank is posted along the road which daily
follows the children on there way to and from school. The students had many
real life experiences with violence, which they told us about- brothers and
sisters who were run over by cars of Jewish settlers or shot in the head by
Israeli soldiers. The students also told me that they have little time to do
school work having to do chores and work for their families, the economic
situation being so dire. They also have difficulties with the Syllabus which
required a lot of work – for example the English syllabus which expected too
much in too little time.
The lives of teachers isn’t much better. Their pay is
around 350 Euros a month. These are men and women who spent many years at
university learning their subjects. Most of the teachers I met had
second or third jobs to make ends meet. Nevertheless you will astonished at the
optimism and openness of the students and at the close relationships that the
normal teachers have with their students.
Other schools are directly next to Israeli walls. This
is leading to real problems for school students and teachers trying to reach
their schools, and it leads to real hardship for many families whose
agricultural land is being divided on both sides of the wall or simply
confiscated without compensation.
Children, youth and education in the
Palestinian Territories 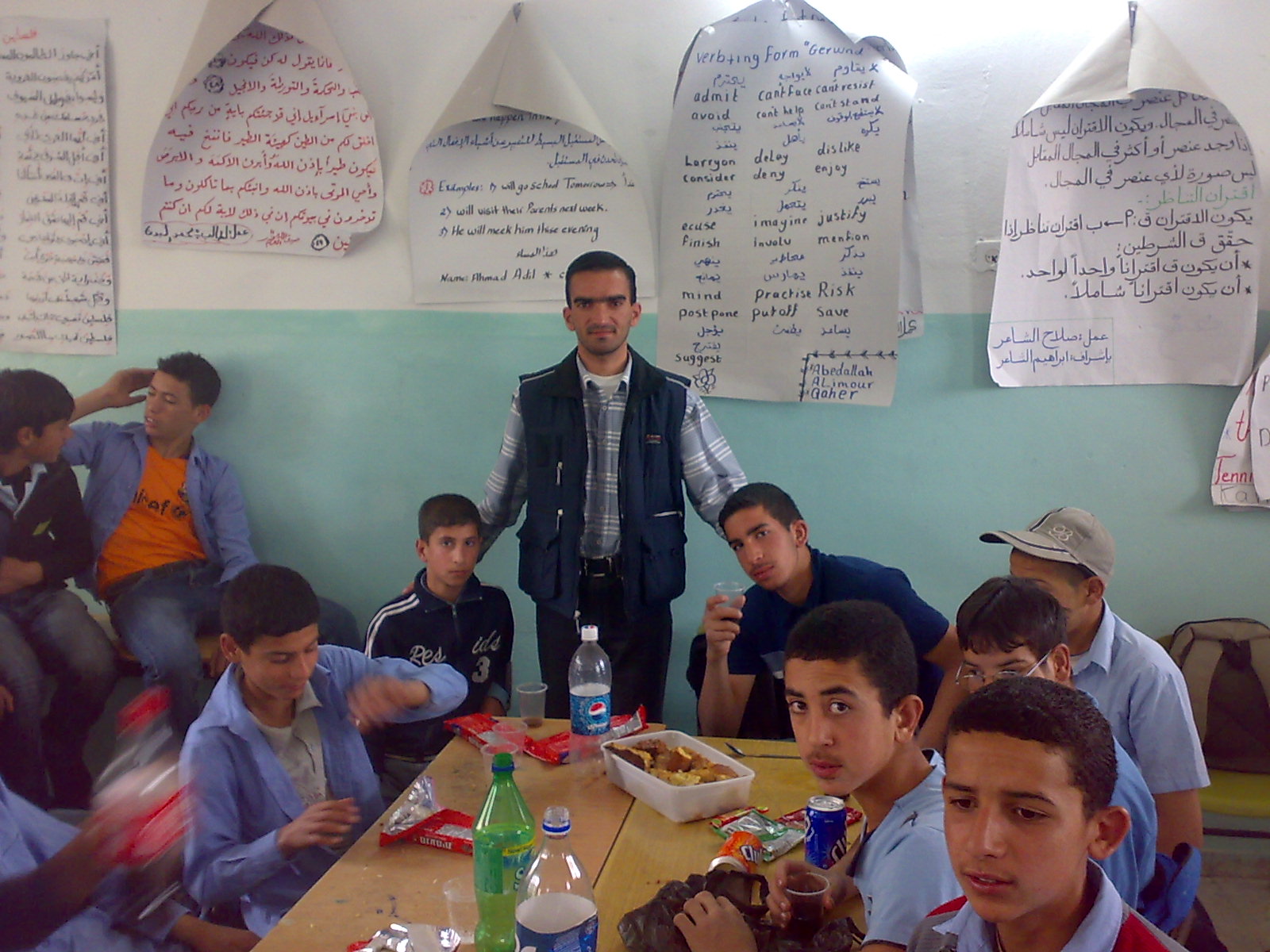 The closure of schools and colleges by the Israeli
army during the Intifada led to the practical collapse of the whole education
system on the West Bank and Gaza. According to the PA’s Ministry of Education
there are today 1474 state schools, 147 private schools, mostly run by church
institutions and 253 UNRWA schools in the Palestinian areas. The teachers in
these schools whether in the city or on the land, in camps or in regular urban
areas, all face a difficult task: ‘Nation building’ under conditions of
occupation and the general poverty of ordinary Palestinian children.
According
to the Child rights fact sheet published by the Save the Children Alliance in
June 2007, Children make up 53% of the population of the Palestinian
Territories – that’s an estimated 2.1 million under the age of 18.  42% of these children are refugees. 882
children have died through conflicts with the Israeli military or settlers
between September 2000 and June 30, 2007. It is estimated that two-thirds of
all injuries in this period were to Palestinian minors. Since the Intifada
started and until the end of 2006, 7,287 houses were partially or totally
destroyed in Gaza, affecting 34,902 children. According to one report (A
Psychosocial Assessment of Palestinian Children written and produced jointly in
July 2003 during a period of heavy Israeli military activity by the Secretariat
of the National Plan of Action for Palestinian Children (NPA) and  Save the Children (SC) and financed and
supported by the United States Agency for International Development): “ Nine
out of ten parents report symptomatic traumatic behaviour amongst their
children, ranging from nightmares and bedwetting, to increased aggressiveness
and hyperactivity, as well as a decrease in attention span and concentration
capacity.” Today 80% of Palestinian children suffer under high levels of
psychic trauma. In one report, the Canadian Journal of Psychiatry estimated the
rate of psychological morbidity in the southern region of Bethlehem in the West
Bank, to be 42.3% among Palestinian children.
The living conditions don’t make the situation much
better. 7 out of 10 households in the Palestinian Territories, or about 2.4
million Palestinians, live in poverty. This accounts for two-thirds of
Palestinian children. 40,000 children work, 73% of whom are forced to do so due
to their terrible financial conditions. Between 2005 and 2006, the number of
people estimated to be food insecure increased by 13%, to 49% of the population
-chronic malnutrition affecting 10% of children under five. In Gaza, 50,000
children are malnourished. More than 70% of 9-month-old children in Gaza are
anaemic, a condition that can damage their cognitive and physical development.

Attending school in these conditions can be very difficult. According to
the ‘Child rights fact sheet’, 23% of students and 36% of teachers are unable
to get to school on any given day. Closures and curfews mean that for 226,000
children in 580 schools in the West Bank, going to school is impossible,
irregular or dangerous. A Birzeit university study in the summer of 2004 found
that 45% of school students witnessed their school besieged by Israeli troops,
18% witnessed troops kill a schoolmate and 13% witnessed the killing of a teacher
in school. In an Article in the ‚International Herald Tribune’ from 18.12.2004
Roger Avenstrup notes the greatest dilemma for teachers is to preach peace,
while outside battles are going on against Israeli tanks. The daily violence
and the dead on the streets have a deeper impact on the children than any
school class.

At the
same time school’s role as a social forum, and provider of support, has grown
in importance. It is the only real chance to meet with peers in recreational,
non-formal and social gatherings. Parents find the environment outside home
threatening. With the exception of going to school, they do not encourage their
children to leave home. The ‘The Psychosocial Assessment of Palestinian
children’ report documented focus group discussions that illustrated the extent
to which school plays a pivotal role in children’s life and is valued as such.
Children believe that school provides them with the opportunity to work
concretely towards ensuring a better future and as a means of peaceful resistance
against the occupation. Discussions also revealed the extent to which children
use the little recreational time they have to discuss and exchange views with
friends, rather than to play.
What
needs to be done?
What
can be done? The problems of education under these circumstances have been the
topic of several reports. These were some of the recommendations of the above
report: “teachers and school counsellors should be provided with guides to
in-classroom psychosocial exercises that allow children to express themselves
and improve their ability to concentrate and be attentive in class.
Furthermore, the school’s capacity to serve as a ‘multi-functional centre’
should be bolstered, allowing children to study, play and socialize throughout
the day…programs that train teachers to deploy proper psychosocial methods in
dealing with children in conflict. Programs should be supported which channel
children’s resilience, encourage positive aspects of their outlook on the
future, and empower them to take control of their lives. A special emphasis
should be placed on activities that allow children to express themselves,
resolve psychological/social/ behavioural problems and encourage their desire
to become positive and supportive members of their community.”
The
need for developing educational methods to deal with the specific conditions
that teachers work and students study in is therefore obvious. The teachers and
the students need new approaches and concrete methods which can they can
implement in daily school life. For those in Europe and the West who have an
interest in education in the Arabic world, and indeed for all who wish to
develop the possibilities of peace and stability in the region, this is a
chance to give concrete aid. It also opens up the chance to get new insights
into education under adverse situations and into Palestinian society. There is
an opening for a two way learning process in the area of education.
Aims
of our workshop
‘Teaching
with Theatre in Adversity’ is a teacher-training workshop for teachers on the
west bank.
We
want to have the techniques, skills and approaches of theatre to contribute to
teacher training on the west bank. The aim of this project is to help teachers
cope and develop ways of making their teaching work more effective using
theatre – to help to change the experience of school under such adverse
conditions by:
–
creating ways of getting required distance and developing ways of discussing
and dealing with issues of conflict
–
exploring the roots of violence and developing methods of non violent self
expression
–
investigating ways of coping with trauma
– developing
methods to trace biographies, explore identities and question narratives
–
developing the physical movement of expression of teachers and students
–
acquiring tools for utilising fantasy and stimulating artistic recreational
activity
–
building on and improving the function of school as a social centre,
– developing the shared language of theatre as a
contribution to the encouragement and strengthening of a new civil society
– helping to motivate active participants in the
nation building process through the participation in civil society
We would
like little to change the material conditions that Palestinian teachers and
school students face. But we can help by helping teachers who work at a key
point in Palestinian society and are so important for the future of Palestinian
Youth. Who teaches the teacher?  Then we
can get teachers from different kinds of schools in different areas who can
generalize the experiences that they made in the workshop and share acquired
skills with their colleagues. We would like to establish through our work later
a network of teachers who know each other, and communicate and develop their
skills further and with whom we would like to stay in contact with.
We
would like to get workshop is not to discuss problems or theatre theories but
to transmit concrete techniques and skills needed to use theatre at school.
.