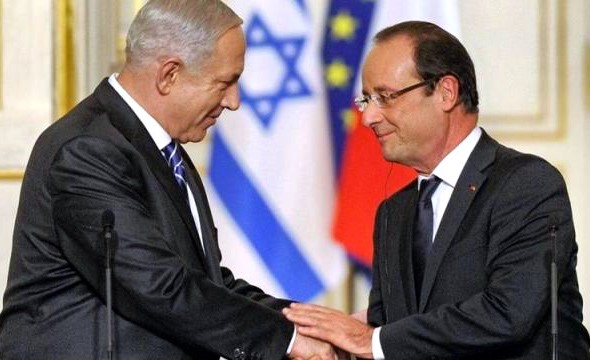 Shaking Hands With A Barbaric, Mentally Disturbed,
Racist War Criminal
“We
must not again allow public emotion or the public media to caricature our
enemies. If our enemies are now to be some nations of Islam, then we should
undertake to know those enemies. Our schools should begin to teach the
histories, cultures, arts, and language of the Islamic nations. And our leaders
should have the humility and the wisdom to ask the reasons some of those people
have for hating us.”
Wendell
Berry
The brutal murders just witnessed in Paris are rightly
deserving of unconditional condemnation as is any unjustified killing of human
beings irrespective of their “race, colour, sex, language, religion, political
or other opinion, national or social origin, property, birth or other status.”
If therefore the murder of some 140 innocent civilians in Paris constituted an
act of war by the Islamic State, then perhaps the pro-Israel President of
France ― whose hypocrisy is equal to that of many other Western leaders ― could
explain to those who have not yet succumbed to Jewish lobby blackmail, bribery,
and bullying, whether Western nations (not counting their colonial atrocities)
have ever perpetrated acts of war against Islam?
“I
had been through the Pentagon right after 9/11. About ten days after 9/11, I
went through the Pentagon and I saw Secretary Rumsfeld and Deputy Secretary
Wolfowitz. I went downstairs just to say hello to some of the people on the
Joint Staff who used to work for me, and one of the generals called me in. He
said, “Sir, you’ve got to come in and talk to me a second.” I said, “Well,
you’re too busy.” He said, “No, no.” He says, “We’ve made the decision we’re
going to war with Iraq.” This was on or about the 20th of September . . . So I
came back to see him a few weeks later, and by that time we were bombing in
Afghanistan. I said, “Are we still going to war with Iraq?” And he said, “Oh,
it’s worse than that.” He reached over on his desk. He picked up a piece of
paper. And he said, “I just got this down from upstairs” — meaning the
Secretary of Defence’s office — “today.” And he said, “This is a memo that
describes how we’re going to take out seven countries in five years, starting
with Iraq, and then Syria, Lebanon, Libya,
Somalia,
Sudan and, finishing off, Iran.”
General Wesley Clark (http://www.democraticunderground.com/1002352496)
The first pertinent question that comes
to mind is whether or not this latest Paris atrocity was a false flag operation
because as demonstrated by history and confirmed by both Adolf Hitler and Josef
Stalin respectively, “Terrorism is the best political weapon for nothing drives
people harder than a fear of sudden death,” and “The easiest way to gain
control of a population is to carry out acts of terror. [The public] will
clamour for such laws if their personal security is threatened.” Leaders
throughout history have have taken advantage of false flag operations and
doctored intelligence to justify their political agenda as was witnessed by the
claim of former U.S. President George W. Bush and then British Prime Minister
Tony Blair ― a lowlife war criminal still pontificating on the Middle East
while raking in millions of dollars ― that Iraq possessed weapons of mass
destruction. The consequence of this blatant lie, much hyped by the Western
media, is still playing out to this day.
“There is no moral difference between a Stealth bomber and a
suicide bomber. They both kill innocent people for political reasons.”
Tony Benn

The Washington DC-based Physicians for Social Responsibility (PSR) recently
released a landmark study ― predictably ignored by the Western
media ― concluding that the death toll from 10 years of the “War on Terror”
since the 9/11 attacks was at least 1.3 million, and could be as high as 2 million.
There is also the reality that U.S. Zionist-Neoconservative instigated Western
wars against Islamic states have killed some four million Muslims since 1990.
This could not have been possible without the portrayal of Islam ― orchestrated
by Israel and its supporters ― as a violent, terrorist religion. Such
indoctrinated perceptions would for example have us believe that Israel’s 2014
summer Protective Edge assault against a defenceless and blockaded population
in Gaza in which some 2,200 were killed including 501children was not an act of
war, but a case of “self-defence.”
(http://www.thepeoplesvoice.org/TPV3/Voices.php/2015/01/14/charlie-hebdo-hyper-hypocrisy-and-the-ho)
As a consequence of a zionist controlled/intimidated
mainstream media and an invariably somnambulant general public, hardly anyone
has ever asked why Israel is primarily and apoplectically concerned over
Palestinians, Iranians, Syrians, and the Lebanese, rather than with al-Qaeda,
al-Nusra, and ISIS? Why do such groups wage wars against Israel’s Arab enemies
but not against Israel itself? Well for a start the head of Muslim Brotherhood
responsible for leading the war against the Syrian regime happens to reside not
in Beirut,  or Cairo, or Riyadh, or Tehran, but in Tel Aviv. The fact is
that by providing medical aid, basic weapons training, and outright military
assistance, the highly principled state of Israel was more of a benefactor and
friend to Muslim terrorist groups  than were the Arab regimes that Israel
regarded as its mortal enemies.
Israel’s covert instigation by Mossad of death squad
invasions across the Arab world are carried out by religious fanatics, semi illiterate
savages, and insane criminals who ironically retain their avowed hatred for
Israel because they are either ignorant of the fact that Israel is their main
sponsor, or are simply incapable of comprehending anything beyond what they are
told by their leaders who are regular recipients of Israeli “baksheesh”
(bribery). In reality the main allegiance of, and only consideration for these
Jihadists is to the thirty pieces of silver.
Consequently Israel’s penchant for blackmailing,
bribing, or buying recruits for its strategy of “smoke and mirrors” had enabled
it to cunningly create Hamas — its supposed archenemy — for the purpose of
disuniting the Palestinian Liberation Organisation (PLO) and Fatah; had enabled
it to to become directly involved in implementing Islamic terrorism in other
Middle Eastern countries; and had enabled it to establish “fake” al-Qaeda
groups within territory under its control so as to justify its ill-treatment of
the Palestinian people.
So despite being apparently engaged in lethal
hostilities with Hamas, it was the Israeli government of then-Prime Minister
Menachem Begin which in 1978 — in a calculated attempt to undermine the PLO and
Yasser Arafat’s leadership — approved the application of Sheik Ahmad Yassin to
establish a “humanitarian” organisation known as the Islamic Association, or
Mujama. The fundamentalist Muslim Brotherhood formed the core of this Islamist
group which eventually blossomed into Hamas with help from Israel which —
according to current and former U.S. intelligence officials — began in the late
1970s to give direct and indirect financial aid to Hamas so as to use it as a
counterbalance to the secular PLO by exploiting a competing religious
alternative. Israelis were also known to have hosted and directed terrorist
mercenary training camps in their own country in order to produce tailor-made
mercenaries for use in Arab countries with a view to causing their destruction
(http://www.globalresearch.ca/articles/ZER403A.html)
“Everybody’s worried about stopping terrorism. Well, there’s a
really easy way: stop participating in it.”
Noam Chomsky
William Hanna is a freelance writer with published
books the Hiramic Brotherhood of the Third Temple and The Tragedy of
Palestine and its Children. Purchase information, sample chapter, other
articles, and contact details at:
(http://www.hiramicbrotherhood.com/)