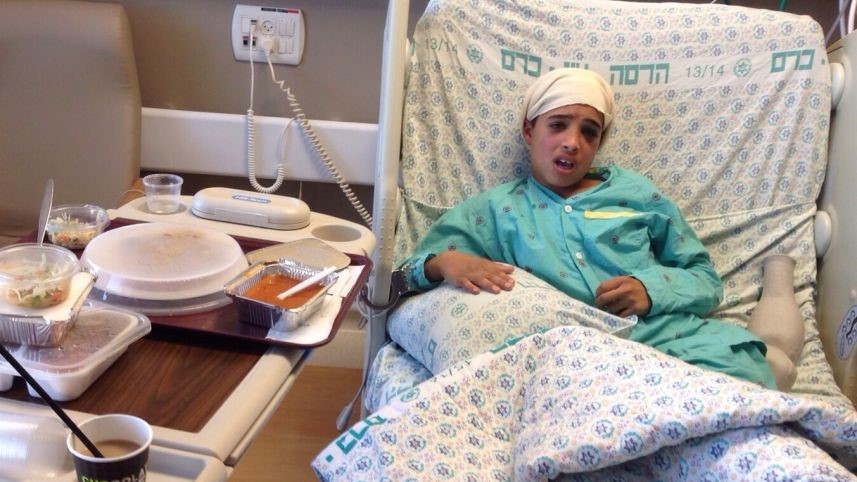 The Israeli Physicians for Human Rights
organisation has condemned the release of the above photo of Mansara, a minor,
in the hospital at Hadassah University Medical Centre at Ein Karem in
Jerusalem. “The fact that it is a photo of a minor in custody who was
photographed without his parents’ permission” is a violation of juvenile law
and privacy laws and the fact that the picture was taken at a medical facility
“apparently with the approval of its management,” was a violation of medical
ethics requiring maintenance of the confidentiality of medical information and
respect for the patient. “Even more disturbing, is that reportedly the
instructions [to publish the photo] came directly from the office of the health
minister [Yaakov Litzman] and that the picture itself was distributed by the
Prime Minister’s Office.”

“In addition, Physicians for Human Rights
takes a grave view of the fact that the public has been briefed with details of
[Mansara’s] condition while his parents are prevented from visiting him and
have not been provided medical information on the condition of their son.
Furthermore, one can see from the picture that Ahmed is bound to his bed, in
violation of juvenile law, which bars [such] constraints on a minor” The group
also alleged that this was done with the cooperation of medical staff
“either through their consent or their silence,” and warned against a
“dangerous erosion of the rules of professionalism and medical ethics,”
particularly during times of confrontation, it would be expected that the heads
of the medical system would withstand political and public pressures.
On November 20, 1989, the United Nations
General Assembly adopted the Convention on the Rights of the Child, a landmark for human rights. Here for the first time was a
treaty that sought to address the particular needs of children and to set
minimum standards for the protection of their rights. It is the first
international treaty to guarantee civil and political rights as well as
economic, social, and cultural rights. It comes as no surprise therefore that
the United States is one of the few nations that have refused to ratify the
Convention, and that Israel ― with its usual arrogance and hallmark contempt
for international law including human rights ― deliberately targets Palestinian
children who are systematically detained by the military and police who subject
them to violent physical and verbal abuse, humiliation, painful restraints, hooding,
threats with death, physical violence, sexual assault, and denial of access to
food, water, and toilet facilities. Such barbarity against children has been
well documented by human rights organisations such as Defence for
Children International Palestine.
The room is
barely wider than the thin, dirty mattress that covers the floor. Behind a low
concrete wall is a squat toilet, the stench from which has no escape in the
windowless room. The rough concrete walls deter idle leaning; the constant
overhead light inhibits sleep. The delivery of food through a low slit in the
door is the only way of marking time, dividing day from night. This is Cell 36,
deep within Al Jalame prison in northern Israel. It is one of a handful of
cells where Palestinian children are locked in solitary confinement for days or
even weeks. One 16-year-old claimed that he had been kept in Cell 36 for 65
days. The only escape is to the interrogation room where children are shackled,
by hands and feet, to a chair while being questioned, sometimes for hours.” (http://www.theguardian.com/world/2012/jan/22/palestinian-children-detained-jail-israel)

Which one is the real
terrorist?
In the case 13-year-old of Ahmed Manasra ― Whose trial
began on November 10 for allegedly stabbing two Jewish settlers whose own
savage crimes against Palestinians go unpunished ― it has to be asked whether
Manasra is a dangerous terrorist or a victim of an “Apartheid” about which Noam
Chomsky said “In the Occupied Territories, what Israel is doing is much worse
than apartheid . . . To call it apartheid is a gift to Israel, at least if by
‘apartheid’ you mean South African-style apartheid . . . What is happening in
the Occupied Territories is much worse. There is a crucial difference. The
South African Nationalists needed the black population. That was their
workforce . . . The Israeli relationship to the Palestinians in the Occupied
Territories is totally different. They just do not want them. They want them
out, or at least in prison.” Is it just possible that growing up in such an
environment drives children to rebel with acts of violence? Are they not
entitled to retaliate against the illegal occupation of their land and the
barbaric persecution of themselves and their families? Are they to accept being
driven from their homes and being ethnically cleansed without objection or
resistance? And will the child, Ahmed Manasra ― a victim of Zionism’s Master
Plan for a “Greater Israel” ― receive a fair trial? I think not. Israelis are
not renowned for either humanity or justice.
(http://www.dailysabah.com/mideast/2015/11/10/footage-shows-harsh-israeli-interrogation-of-palestinian-teen-ahmed-manasra-ahead-of-knife-attack-trial)
William Hanna is a freelance writer with published
books the Hiramic Brotherhood of the Third Temple and The Tragedy of
Palestine and its Children. Purchase information, sample chapter, other
articles, and contact details at:
(http://www.hiramicbrotherhood.com/)