Scottish independence: Good or bad for the Jews?

This is from the Times of Israel and is about whether an independent Scotland will be ‘good for the Jews’.

My gut feeling about Scottish independence is that I’m for it. I
like the idea of people living freely together in their own land so why
should the Scots not live together in a free Scotland? Also, it’ll
do the UK no end of good to be cut down to size a bit. Perhaps without
Scotland there’ll be a bit less of that, now rather forlorn, imperial
swagger that’s caused us and others so much trouble in the post-war
world. Finally, anything that upsets those horribly corrupt, and grovelling politicians in Westminster is fine by me.

But this article is about how an
independent Scotland will be ‘bad for the Jews’ with independence
bringing with it a rise in anti-Semitism and I think there may be something in this.

Away from England, the Scots may find a
way to free themselves from Jewish control. After all, eighty per cent
of all Conservative MPs are members of Conservative Friends of Israel.
Surely the Scottish National Party membership is somewhat lower! 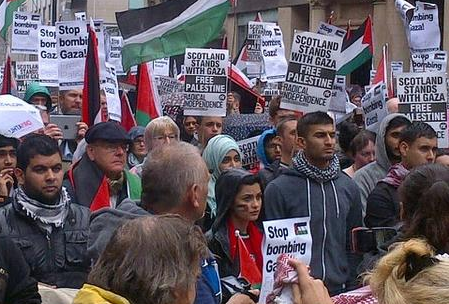 But the article points specifically to
the militancy of Scottish Palestine solidarity activists. And it’s
true. Scottish solidarity campaigns have been pretty hard-core in their
challenge to Israel. But what is also true is that their leadership,
notably Mick Napier, are as dedicated guardians of Jewish
thought-control as one can find.

So, free from Jewish-controlled
England and with a tradition of militant anti-Zionism, I wouldn’t be at
all surprised to see a rise in Scottish anti-Semitism. The trouble is,
given that the biggest Jew-haters (Jew haters, not decent anti-Semites)
tend to be those who grovel most (after all, don’t we always hate those
who most humiliate us), will it be led by the likes of Mick Napier?

Scottish independence: Good or bad for the Jews?

On September 18th anyone aged 16 or over who resides in Scotland, is on
the electoral register and a citizen of the United Kingdom, the
Commonwealth or an EU country will get a straight ‘yes’ or ‘no’ vote (no
other option is available) on the most important issue in the 307-year
history of Great Britain. The question on the ballot paper is stark,
‘Should Scotland be an independent country’? The cataclysmic
ramifications behind this apparently simple question is nothing less
than the dissolution of the union of England and Scotland which,
together with Wales and six of the nine counties of Ulster, forms the
United Kingdom of Great Britain and Northern Ireland. As the UK is a
nuclear power, a leading world economy and one of the five permanent
members of the UN Security Council, this has global implications. How
did this state of affairs come into being?

On May 1st 1707 England (which had de facto annexed Wales in the
Sixteenth Century) and Scotland which had hitherto been two separate
nations, united politically. They were already sharing the monarchy from
the royal House of Stuart since 1603 when King James VI of Scotland
became James I of England. The parliaments of both countries had passed
their respective Acts of Union in 1706 and 1707 and in effect Scottish
independence ceased from that point. Why did Scotland voluntarily cede
its independence? In reality it had little choice in the wake of the
ill-fated Darien Scheme. This was an attempt to compete with England in
world trade and colonization. The project sought to plant a Scottish
colony on the narrow isthmus of Panama in the fond hope that it could
thus control trade carried overland between the Atlantic and Pacific
Oceans. This would save merchant ships, so the thinking went, the long
and hazardous sea-route around Cape Horn and so was a kind of Panama
Canal forerunner. An incorporated trading organisation, The Company of
Scotland, was formed and more than £400,000 (worth over a hundred times
that in today’s money) was raised by subscription and invested in the
plan. To put this immense sum into perspective, it was about one fifth
of all the liquid capital in Scotland at the time.

Unfortunately the scheme proved to be a disaster from first to last.The
settlers found the land difficult to cultivate and couldn’t feed
themselves, the natives were unwilling to trade food, the Spanish
claimed sovereignty over the area and were actively hostile and the
climate, mosquitoes and disease unbearable. The King, William III, was
unwilling to risk war with Spain and refused help to the colonists.

By the time the enterprise was abandoned, three quarters of the settlers
were dead and the capital had disappeared. An attempt to recoup money
by trading along the west African coast also failed and three ships were
lost. A fourth chartered ship was seized by the English East India
Company to deter competition. Scotland was almost bankrupted by this
debacle. When proposals were again resurrected to bring about a
political union with England under the last Stuart sovereign, Queen
Anne, they were received north of the border with more enthusiasm than
hitherto. Negotiations between parliamentary commissioners ran between
April and July 1706. Scotland had to concede that if Anne died without
surviving issue (which she eventually did) then the Protestant
Hanoverian dynasty would succeed to the joint throne. In return it got
access to the England’s colonial markets and a cash payment to offset
Scottish liability to England’s national debt. In addition, the Scottish
pound was stabilized at the fixed rate of one Scottish pound to one
English shilling. Thus was born Great Britain with a joint parliament in
Westminster and none in Edinburgh.

Fast forward now to 1997 when the then Labour government included plans
for a devolved Scottish assembly, which came into being in May 1999.
After the Scottish National Party became the largest party in the
Scottish Parliament and later won an overall majority, pressure for a
full independence referendum became irresistible.

Where does this leave the Scottish Jewish community? There are an
estimated 6,000-7,000 Jews in Scotland, mainly located in Glasgow with
smaller communities in Edinburgh and Dundee and small pockets scattered
around the country. Historically Jews have not been oppressed in
Scotland but there is palpably much animosity to them north of the
border. This is sometimes disguised as anti-Zionism but often without
even this fig-leaf. Operation ‘Protective Edge’ this summer stripped
away any pretense that this antagonism was merely directed at Israel and
not at Jews per se. In the first week of August, more anti-Semitic
incidents were recorded than in the whole of the previous year.
Insulting graffiti on synagogues, verbal and written threats, incitement
to violence, open hostility to Jews in universities, trade unions and
town and city councils (some of which have flown the Palestinian flag)
are everyday events and are making life difficult for Jewish Scots. The
Scottish Palestine Solidarity Campaign is particularly active and
displays a fanatical hatred of Israel and by implication, Jewish
self-determination.

Yvonne Ridley, a former reporter captured by Jihads and ‘turned’ by them
to their cause, tweeted that she wanted a ‘Zionist-free Scotland’ As
many, if not most, of the community support Israel’s existence, this
implies a Jew-free Scotland. The Scottish Parliament itself has debated
more anti-Israel motions than against all other countries combined
despite the horrendous slaughters all over the Muslim World. Alex
Salmond, who stands to become an independent Scotland’s first Prime
Minister has variously called Israel ‘not a normal state’ and ‘a
criminal state’ and one ‘which should be subject to sanctions.’ An
independent MSP, Jean Urquhart on her website denounces ‘Israel’s
genocide of the Palestinian People’ while four local councils have
publicly said they will boycott all Israeli goods. The Church of
Scotland issued a document denying any Jewish claim to the Holy Land
although this was partly ameliorated after a meeting with
representatives of the Jewish community. Scot, George Galloway who is
notorious for his anti-Israel obsession and is one of Bradford’s MPs,
said that no Israelis should be tolerated in that city. The Scottish
Human Rights Commission has issued seven statements condemning
countries, six of those were against Israel. These are just a few
examples of the unhealthy and manic obsession that Scots have with the
Jewish state and which is directed at no other country, no matter how
evil.

The Scottish Council of Jewish Communities in August this year issued a
statement calling on public bodies to recognize the growing number of
incidents of antisemitism in the country. Should the Scots vote for
independence and the restraining hand of Westminster be removed, one
wonders how long it might be before motions to ban schechita (kosher
animal slaughter) and brit milah are debated in the Scottish Parliament.
This has already happened in some European states and is a
‘respectable’ way to make life difficult for Jews.

Would Scottish Jews be required to swear an oath of non-allegiance to
Israel? Would an Israeli ambassador be even allowed into Edinburgh?
These hypotheses may seem fanciful but given the climate of hostility, I
suspect not. There’s an old, wry joke about a Jew who receives a
telegram (these days it would have to be a text message, email or Tweet)
from a relative which says “start worrying- details to follow”.
Scottish Jews, I’m sure are worried, very worried. As always, and as
reaction to this summer’s events in Gaza has thrown into sharp relief,
prudent Diaspora Jews need to keep a bag packed at all times.