You are great Barnaby, thanks a lot from ProMosaik e.V.

I wanted to thank you for your wonderful interview. You are brave, we all love you here! 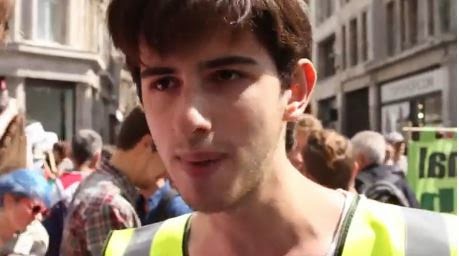 Here for all who have not already heard what Barnaby Raine, 19 year old school
student activist, organiser of the Jewish Bloc against
Zionism, said speaking at the Gaza demo outside the BBC on Saturday 9 August
2014:
Barnaby: I am proud to
stand here today as a Jewish boy from North London in solidarity with the
people of Gaza. Make no mistake: the lesson of the Holocaust is not that we
should close our eyes to other people’s suffering in the name of
self-protection. The lesson of the Holocaust is not that some lives are worth
more than others or that only some deaths are worth grieving [over]. The lesson
of the Holocaust is that crimes are perpetrated when people forget that we are
all human beings. So, I’m not here today in spite of Jewish history; I’m here
today because of Jewish history. I’m here today because my great-grandparents
knew what it meant to be excluded and to be the victims of racism. They knew
what it meant to be booted out of their homes and turned into refugees. So I
can never turn a blind eye to dispossession and discrimination, to occupation
and marginalisation wherever it takes place and whoever its victims are and
whoever its perpetrators are.
But it’s not just as a
Jewish person I am here but as a human being. You know, here we stand today
outside the BBC. The BBC talks about a “conflict” in Gaza. A
“conflict”! That is grotesque. It is not a conflict when the world’s
fourth largest military power blockades, besieges and imprisons a stateless people
who have no army of their own. Is that a conflict? [Crowd shouts: NO!] Is it a
conflict when Israel bombs families in their homes and sick patients in their
hospital beds? Is that a conflict? [Crowd: NO!]  When people flee for
their lives to United Nations shelters and then Israel attacks the United
Nations shelters, is that a conflict? [Crowd: NO!] No, no, no, BBC, this is not
a conflict. This is a massacre!
I am 19 years old.
What future awaits the 19 year-olds of Gaza? Their diets are stunted because
the Israeli siege blocks their access to food. There are hardly any jobs,
because Israel has cut Gaza off from the rest of the world. And just a few days
ago, Israel bombed a university. Inaction in the face of this scale of
injustice is criminal. So we’ve got to send a message to our own government
today: Stop arming Israel! And while we’re at it, let’s send a message to
governments all over the world: If you call yourselves an international
community, give that phrase some meaning! Let’s put sanctions on Israel
until this barbarism ends!
So, I just want to leave
you with one important point: In the early 20th century people all over the
world from all backgrounds who stood with the oppressed might have declared
“I too am a Jew!”. When apartheid besmirched the earth, people might
have said: “I too am a Black South African!”. Well, today, people
from all backgrounds, from all walks of life, all over the world, come together
and say in our thousands and in our millions: “We are all Palestinians!”.