Two Palestinian youth were killed
on Friday when Israeli soldiers used live rounds and tear gas to attack
protests in solidarity with Gaza organized all over the West Bank and
East Jerusalem. 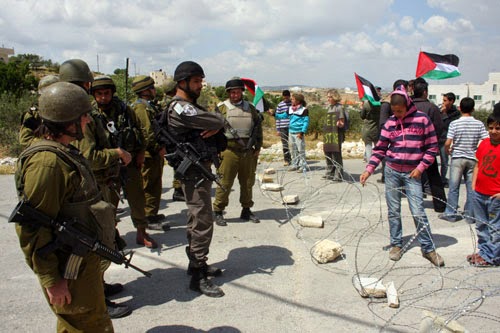 Odai Jabir, 19 years old, was shoot and killed by
three live rounds to the chest by Israeli soldiers when they attacked
protesters at the village of Safa west of the central West Bank city of
Ramallah on Friday afternoon.

Fifteen more civilians were injured, five by live rounds, in Safa
village during the clashes there, Palestinian Medical sources reported.

At the Qalandiya checkpoint, separating the city of Ramallah from
Jerusalem, Israeli troops shoot and injured 12 Palestinians civilians as
they protesters the Israeli war on Gaza.

Earlier on Friday Tamer Samour, 22 year-old, was killed when he was
shoot by Israeli soldiers with live rounds at the village of Dier Al
Ghisoon near the northern West Bank city of Tulkarem.
Samour joined a protest organized in solidarity with Gaza that left
his village and marched to a nearby Israeli settlement. Troops stationed
there used live round and tear gas against the unarmed protesters
killing Samour.

Meanwhile in Hebron city on southern West Bank at least 70 protesters
were injured, many with live rounds as Israeli soldiers attacked
protesters on Friday midday.