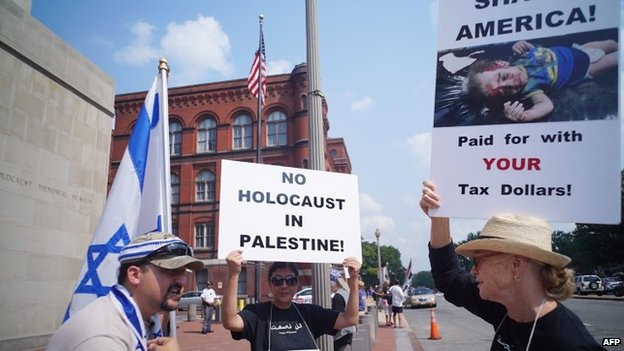 More
than 300 Holocaust survivors and their descendants have issued a
statement condemning what they call Israel’s “genocide” in Gaza.

The International Jewish Anti-Zionist Network placed the statement as an advertisement in the New York Times.
It was in response to an advertisement by Holocaust survivor
Elie Wiesel which compared the Palestinian militant movement Hamas to
the Nazis.
More than 2,000 people have been killed in Gaza in the ongoing conflict.
Most of them were civilians. On the Israeli side, 68 people – mainly soldiers – have been killed.
The Gaza conflict has drawn strong reaction in the US, with pro- and anti-Israel demonstrations taking place.

The advertisement in the New York Times is signed by 40 Holocaust survivors and 287 descendants and other relatives.

It calls for the blockade of Gaza to be lifted and Israel to be boycotted.

“As Jewish survivors and descendants of survivors and victims
of the Nazi genocide we unequivocally condemn the massacre of
Palestinians in Gaza and the ongoing occupation and colonization of
historic Palestine,” the statement says.

The IJAN, founded in 2008, is a small left-wing organisation which is highly critical of Israel.
Israel tightened its blockade of Gaza in 2007 after Hamas,
which rejects Israel’s right to exist, took control of the territory,
having won elections the year before and ousted political rivals Fatah.
Egypt, which also regards Hamas as a threat, maintains a blockade of Gaza’s southern border.