August 16, 2014February 23, 2021 by Milena Rampoldi
Hi all,
we would like to show you a couple of opinions of famous actors we all know from very famous movies we love so much….

about our principal matter of these weeks: ISRAEL…

A couple of them even call for the genocide against Arabs… others see zionism as terrorism.

Richard Gere:  Arabs are a burden on the world and should be annihilated.
Sean Connery:  We are talking from the point of strength, what if we were the weak ones?
Mel Gibson:  Zionists are the soruce of destruction, I wish I can fight against them.
Tom Cruise:  The Arabs are the
source of terrorism, they don’t spare anyone without attacking them.  I
hope that Israel destroys all of them.
Anthony Hopkins:  Israel means war and destruction and we Americans are behind this war and I am ashamed of being American.
Al Pacino:  Take a look at Israel’s history and you would knwo who the terrorist is.
Dustin Hoffman:  Humanity seized to exist when Israel was established.
Ralph Fiennes:  We are now living in a jungle where the strong eats the weak.  We are not better than the Arabs to despise them.
Wil Smith:  Both sides are wrong and the killing must be stopped.
George Clooney:  Bush, Sharon, Blair and Rice are names that history will damn.
Angelina Jolie:  Arabs and Muslims are not terrorits.  The world should unite against Israel.
From my point of view, the best is Al Pacino because he does not state anything but he shows us the way to understand… and this is the historical perspective… Study and analyse the facts… 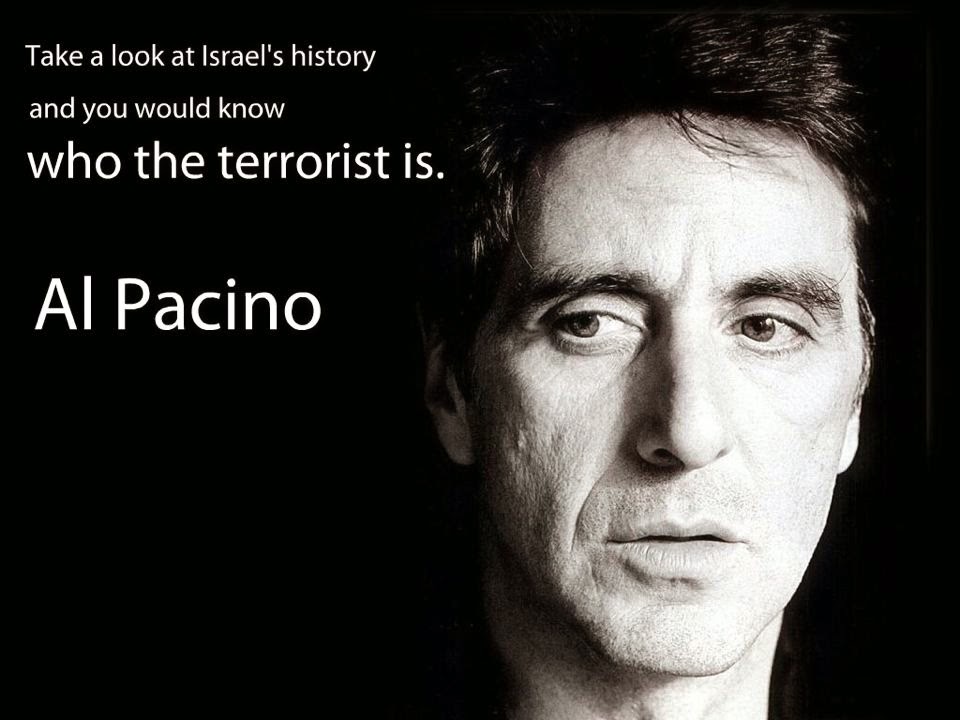 and call us, as Mandela said to Friedman …. Call me to tell me your decision!
We are with anti-colonialism, we are with justice, and we are against the arms lobby, and we are with HUMAN DIGNITY and with a JUST PEACE.
Thank you
Dr. phil. Milena Rampoldi
ProMosaik e.V.